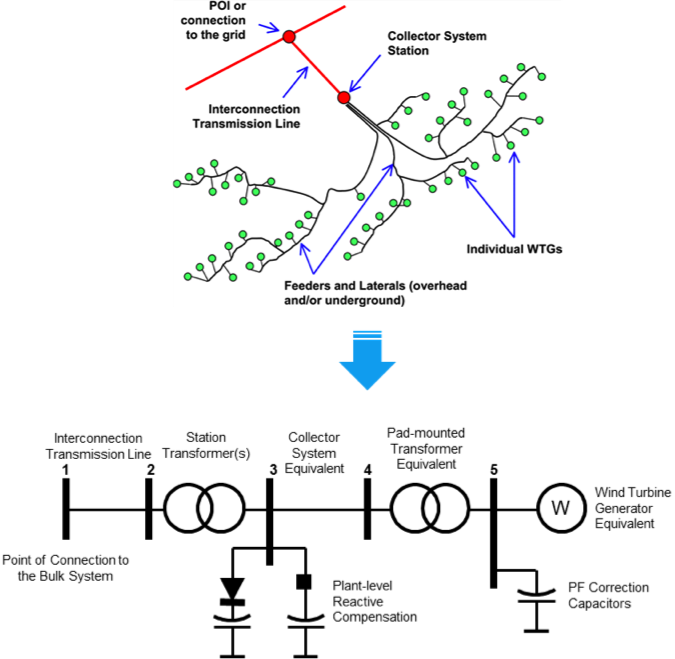 A typical wind power plant may contain hundreds of wind turbines that are interconnected through a collector system. Though the impact of individual wind turbines to the electric grid is small, the larger wind power plant can have a significant impact. Because it is impractical to model the individual wind turbines for system simulations, a simplified equivalent is necessary. A technique for equivalencing the collector system of a large wind power plant was developed by NREL. This equivalent representation along with the generic WTG models allow for grid operators and planners to perform the necessary simulations required by the North American Electric Reliability Corporation (NERC).

Wind generation continues to dominate the interconnection queues and the need for generic, standard, and validated publicly available models for variable generation technologies continues as transmission planners are required to study these technologies’ impact on the grid. Sandia is continuing its efforts to fully develop, validate, and disseminate wind–turbine generator (WTG) models for use in power system planning and analysis—helping to reduce the barrier to reach the nation’s renewable energy goals.

This effort aims to reduce deployment barriers, specifically those relating to integrating wind energy generation into the electric grid. Developing and validating planning models for wind power plants continues to be an industry priority. The North American Electric Reliability Corporation (NERC) has clearly stated that developing and improving access to validated, nonproprietary planning models is a prerequisite for large-scale variable generation integration. These models are reduced-order, positive-sequence models suitable for large-area transmission studies that are performed by grid operators and planners.

The DOE strategies for grid system planning depend on strong partnerships with external stakeholders including regulators, state governments, system operators, utility and transmission planners, who ultimately are responsible for implementing and integrating wind energy generation into their transmission and distribution systems. To that end, Sandia continues to coordinate and participate in the WECC Renewable Energy Modeling Task Force which has led the WTG model development effort in the U.S. Sandia also maintain an active role in the international community and serves as the U.S. delegate for the International Electrotechnical Commission (IEC) Subcommittee WG27: Electrical Simulation Models for Wind Power Generation. 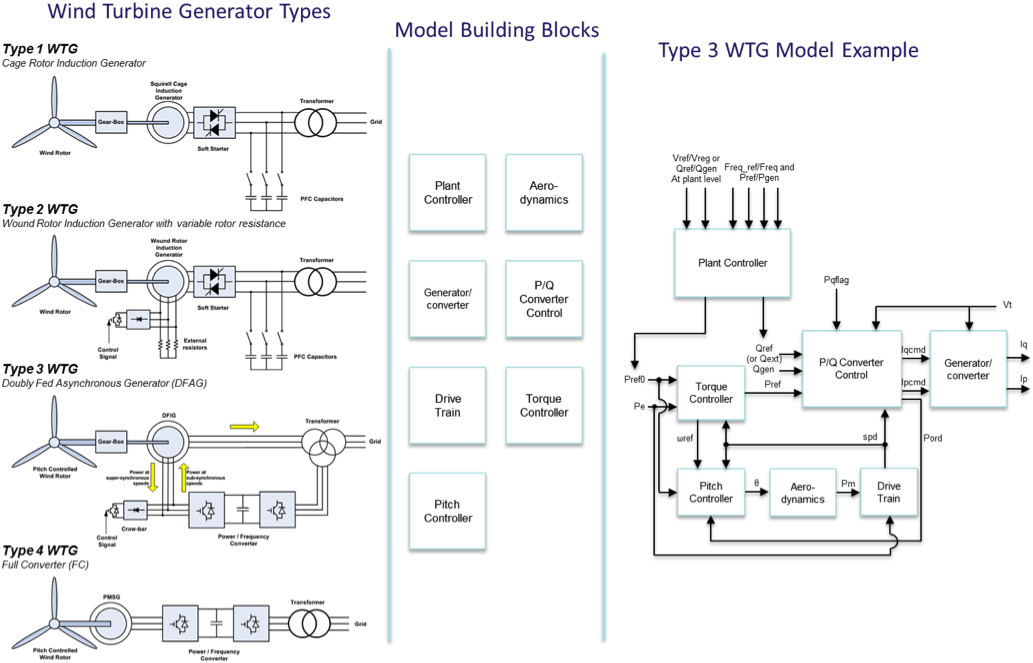 The second generation of generic WTG models moved to a modular approach. That is, the models consist of smaller modules that are truly generic and usable for any appropriate renewable-energy system. Above (from left to right) are the main electrical components of the four types of wind turbine generators, the various modules that are needed to represent these wind-turbine generators (and utility-scale photovoltaic systems), and the Type 3 WTG model that utilizes all of the modules.

With Sandia leadership models for all four WTG types have been developed and implemented in a GE’s PSLF®, Siemens PTI PSS®E, and PowerWorld. In 2013, Sandia worked with partners to complete the implementation of second-generation WTG models, which are more modular and flexible. Sandia has also worked with the Electric Power Research Institute (EPRI) and the National Renewable Energy Laboratory (NREL) to develop a model validation tool for the Type 4 models.

These WTG models will continue to evolve as new enhancements and features become available to operating wind power plants.