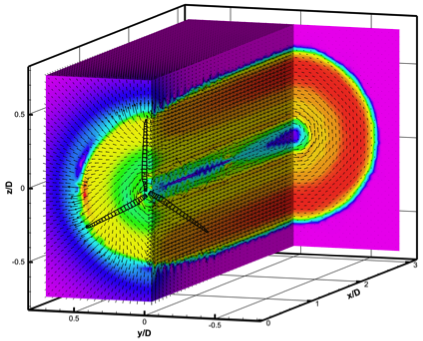 Induced velocity in the rotor wake 0.1-3 diameters downstream of the rotor plane of the NREL 5MW wind turbine reference model, as predicted by a free-wake vortex method. Velocity vectors are projected in the planes shown.

The aerodynamic design of a wind turbine rotor is performed using a combination of experimental data and a variety of different design and analysis tools. Blade element momentum theory (BEMT) has been a staple of rotor design. It is still used heavily for rotor design work, but is now commonly utilized with optimization methods, where thousands of cases can be analyzed in less than an hour on modern desktop computers.

Blade element vortex methods (BEVM) have been available for several decades, but are less commonly used for rotor design work. Vortex method based rotor design tools capture more of the physics of the interaction between the atmosphere, rotor, and the rotor wake, but at a higher computational cost than BEMT. For example, a free-wake BEVM can produce three-dimensional predictions of the rotor wake as well as wake velocity deficits, as shown in the two attached images.

Models of various fidelities are being utilized to quantify the effects of blade designs on wake characteristics. The near-wake structure is created by and dependent upon the blade circulation distribution. A free-wake, blade element vortex method is being used for most of the analysis cases, as the method allows for the relatively fast computation of near-wake induced velocities as a function rotor blade circulation. High fidelity large-eddy simulations (LES) of the same rotor wake are also being performed for direct comparison to the wake deficit predicted by the free-wake vortex method. These simulations will define constraints on the parameters used for scaled rotor design work.

Reynolds averaged solutions of the Navier-Stokes equations (RANS) are being used for full rotor simulations for research purposes and are gradually being adopted for design work. These solutions can capture more complicated flow details and interactions, but at a much higher computational cost than BEMT and BEVT. Large eddy simulations (LES) are even more expensive, and are being used with actuator line rotor definitions to analyze entire wind farms, including complex terrain and atmospheric stability and turbulence.

Blade designers are often limited to using airfoils with which they have familiarity. The designer’s trust of an airfoil is driven by available wind tunnel data and proven field experience with its performance in relevant operating regimes. Sandia is currently using computational analyses of multiple fidelities, such as RANS and LES, to enhance the applicable design space of specific airfoils. LES has also been used in high fidelity predictions of airfoil noise.

Velocity magnitude around a DU97-W-300 at α = 6° analyzed using a Sandia CFD code. High fidelity computational analyses are used to expand the design space beyond the limitations of experimental data.