During a wind turbine’s operational lifetime, its rotor blades endure a wide variety of wind loading. The blades directly capture all of the force applied to the entire wind-turbine system.

A turbine’s exact wind loading is fundamental to overall system design. Due to the large potential for variability in 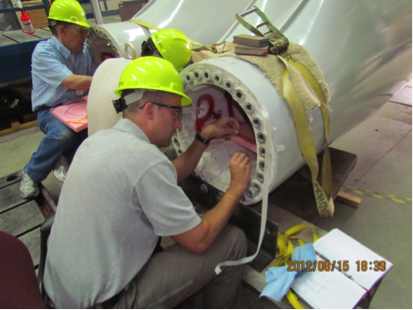 exact loading is difficult to model accurately. To overcome the wind-loading unknowns the structure will experience during its lifetime—to ensure that the unit operates to the end of its design/warrantied lifetime (usually 20 years)—additional safety factors are engineered into the design, usually requiring heavier and more costly components.

By implementing a set of sensors to measure wind-loading forces on the rotor blades during actual operation, we can shine light on the unknowns of how the wind acts directly on the wind-turbine system.

This work has been funded by the U.S. Department of Energy’s Wind and Water Power Program.

Attaining a better understanding of the fundamental physics behind the loading that occurs during wind-turbine operation requires many different sensor types. Sandia engineers work with a wide array of transducers to characterize the surrounding environment as well as the turbines’ aerodynamic and structural responses. We measure: 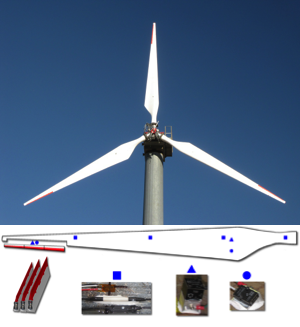 A SMART rotor with embedded sensors.

The SMART active aerodynamics rotor was recently flown to assess the control authority of trailing edge flaps during operation. Many structural sensors monitored rotor loading to positively confirm the ability of the flaps to regulate blade wind loading.