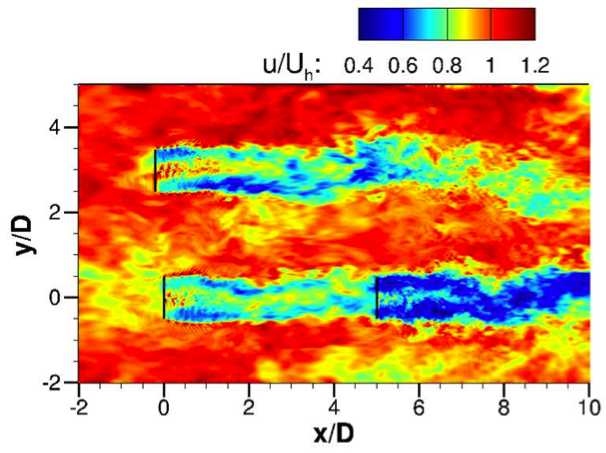 Instantaneous contours of stream-wise velocity from a LES of the SWiFT test site using the University of Minnesota VWS.

The Department of Energy’s Scaled Wind Farm Technology (SWiFT) facility was commissioned in 2013 in order to provide an experimental site with research-scale wind turbines for studying wind-turbine wakes and turbine–turbine interactions at a realistic scale. The SWiFT site is managed and operated by Sandia National Laboratories for the DOE Wind Program.
In a separate, but parallel, effort (beginning with a grant from the DOE), the University of Minnesota has developed the Eolos Consortium, a research group focused on advanced wind-energy measurements and simulation methods. The Eolos group has developed a high-fidelity wind farm simulation code, the Virtual Wind Simulator (VWS), which is able to simulate the generation and interaction of wind-turbine wakes within a turbulent atmospheric boundary layer using a large eddy simulation (LES) method.
Current and ongoing work aims to leverage the simulation capabilities at both Sandia and the Eolos Consortium in order to enhance the current and planned research activities at SWiFT. The VWS code has been ported to Sandia’s Red Sky high-performance computing cluster, and initial simulations of various test cases including the SWiFT site configuration were carried out (see figure). A detailed code scaling study was performed to confirm VWS performance on Red Sky and to provide researchers with information on how the parallel performance of the code can be improved. The code is being using now to guide the design of experimental campaigns at SWiFT, as well as associated rotor hardware and sensing suites to offer high-quality validation data for the research community.