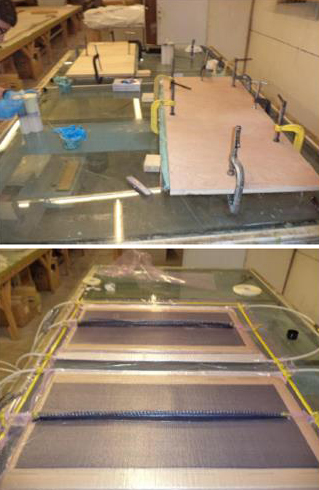 Sandia recently produced the final set of inspection panels to be used to evaluate nondestructive inspection (NDI) tools as part of the Blade Reliability Collaborative. This is the final step in a multiple-year task to investigate wind-blade inspection methods. For the first time in the study, flaws will not be known by the inspection technicians—allowing the technology to be evaluated in terms of its probability of detection (POD).

Different types and sizes of flaws were embedded into substructure components representing critical structures in wind blades. The test specimens represent the most common structural designs seen on modern blades and underwent a thorough review by industry participants in the design phase. Sandia is actively seeking participants from NDI technology vendors, blade service companies, and blade manufacturers in this study.

Additionally, as part of continued testing for the DOE/Sandia/Montana State Univ. Composite Materials Database, the first four-point beam test was completed on the newly built subscale test frame. This test equipment was specifically built to allow researchers to test wind-turbine blade structures at an intermediate scale, examining how they perform under complex loadings and with embedded flaws. This permits improved knowledge of how wind-blade materials perform during turbine operation.