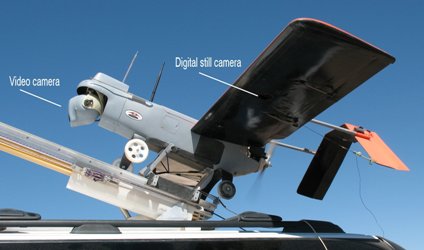 The BAT system consists of a fully autonomous GPS-guided UAS with a 6 ft wingspan, a catapult launcher, ground station with mission planning and flight software, and telemetry system. The BAT is launched off a catapult and is capable of manual or autonomous landing.

The group started with a short flight by a “Bat-3” near the hangar area, followed by several slightly longer flights, including one out over the ocean for a brief time. This portable, medium-range, fixed-wing UAS can operate autonomously for up to 6 hours at a time, with an operational altitude of around 500 to 1500 feet above ground level. The aircraft can send and receive data up to 10 miles away to deliver high-quality video imagery using color and infrared cameras.

The team also tested an Aeryon Scout micro-UAV™ (quadcopter) completing more than 10 test flights within the designated Restricted Area, R2204, located at Oliktok Point. Weighing less than 3 pounds, it can be airborne in seconds after unpacking from a small case or backpack. A quadcopter is one option under consideration for deployment of radar retro-reflectors, essential for radar calibration.