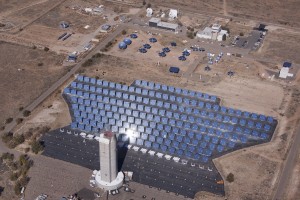 On June 26 and 27, a series of exposures were made to multiple Boeing test articles using the heliostat field and the high speed shutter located at the test bay 140 above ground in the solar tower at the National Solar Thermal Test Facility. The exposures were made at various flux levels and used between 30 and 114 heliostats. The testing was considered a resounding success by Boeing. The test series was completed under a Work for Others agreement. As a result of the new heliostat facets and the improved canting and focusing, the reflected beam was much tighter than ever seen before. The tight beam resulted in considerably less spillage and therefore less impact to surrounding support structures. (Cheryl Ghanbari, cghanba@sandia.gov, 505-845-3426)