The Rush to Exploit an Increasingly Ice-Free Arctic

The Rush to Exploit an Increasingly Ice-Free Arctic 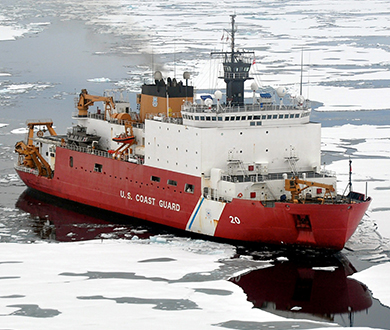 It’s that time of year again, when we check in to see where the annual Arctic sea ice minimum will end up. We haven’t quite bottomed out at the end of the melt season, yet, but already 2012 has set new records for smallest Arctic sea ice extent and volume, smashing through the numbers from 2007. Records are often attention-grabbing and “exciting,” in a way, but while Usain Bolt’s incredible shrinking 100-meter dash time may be uplifting, shrinking sea ice is not.

Every time a new sea ice extent record is broken, the same question comes up: how long until it’s gone? That is, how long will it be before the Arctic Ocean is functionally ice-free in the summer, legitimately opening the  Northwest Passage?

The fact is, we don’t know. Climate models continue to underestimate the rate of sea ice loss we’re observing, leaving researchers to hazard less scientific guesses. Many estimate that day will come around 2030, but some others push it out to 2070. Regardless, Arctic sea ice is changing—and fast. The prospects of open shipping routes and newly accessible resources have corporations chomping at the bit and governments racing to prepare the way. Three (open access) articles in the Bulletin of the Atomic Scientists describe the outlook for a changing Arctic from the perspectives of the U.S., Russia, and Canada. There will be some disagreements, but all parties have at least one view in common—things will get complicated.

There is, of course, another obvious concern—defense. Canada, in particular, can no longer ignore the Arctic as a quiet border. And even if all nations are harmoniously cooperative, there’s still the possibility of terrorism (including ecoterrorism). Learning to operate in the Arctic will be no small task for armed forces.

Add in the fact that countries will be expected to protect commercial operations in a region teeming with other nations and other corporations, and it’s easy to imagine friction. As George Backus, author of the U.S. perspective and a researcher at Sandia National Laboratory, writes, “An unexpected confluence of vessels and aircraft being in the wrong place, when Arctic weather conditions prevent adequate communications, could lead to tense situations, unless national security forces have the ability to readily manage the situation.”

Russia, Canada, and the U.S. aren’t the only nations with an Arctic claim. There are others (most notably Denmark and Norway), and there are also countries with no claim that, nevertheless, want a piece of the action. Many European nations are in that category, as are China, South Korea, and Japan.

Read the rest of the article at ARS Technica.