The Quest for Efficiency in Thermoelectric Nanowires 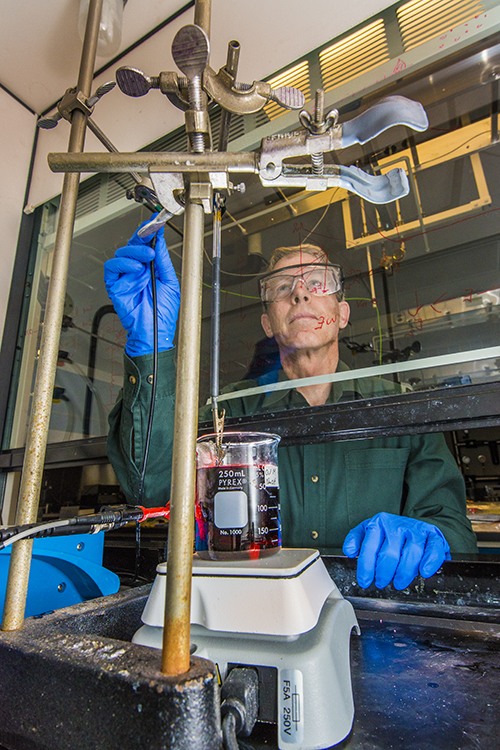 The work, “Using galvanostatic electroforming of Bi1-xSbx nanowires to control composition, crystallinity, and orientation,” published in the Materials Research Society’s Journal of Materials Research was the first time researchers managed to control crystal orientation, crystal size, and alloy uniformity by a single process. All three factors contribute to better thermoelectric performance, said Graham Yelton of Sandia’s Physics Based Microsystems Dept. “The three together mean a huge gain, and it’s hard to do,” he said. “It’s turning the knobs of the process to get these things to behave.”

Despite their inefficiency, some thermoelectric materials are already in use. Yelton compares their stage of development to the early days of solar photovoltaic cells: Everyone saw the potential, but they were so inefficient they were used only when nothing else worked. Improved efficiency in nanowires would increase the use of thermoelectric materials. They’re already used in some sensors, and vehicle manufacturers hope they can harvest heat from exhaust systems to power vehicle sensor systems, Yelton said.

(a) A bright-field scanning transmission electron microscopy image of nanowire/anodized aluminum oxide cross-section prepared by focused ion beam lift out. Nanowires synthesized from 1:1 solution using SbI3. Nanowires are polycrystalline with grains ranging from 5 to 8 nm. (b) A bright-field transmission electron microscopy image of nanowires synthesized from 1:1 solution using SbCl3. The template has been removed and the wires are supported on a holey carbon grid.

Sandia’s paper describes how the team created thermoelectric nanowire arrays with uniform composition along the length of the nanowire and across the spread of the nanowire array, which potentially can include hundreds of millions of nanowires. In addition, they created nanowire crystals of uniform size and orientation, or direction. Uniform composition improves efficiency, while orientation is important so electrons, the carriers of energy, flow better.

While the Sandia team has been able to get good contact at the bottom of an array, making a connection at the top has proved difficult, he said. “To make a contact and measure array performance is not trivial,” Yelton said. He and his colleagues are seeking further funding to solve the problem of successfully making contacts, and then to characterize the thermal electric properties of arrays. “If successful at the labs, we would try to find an industry collaborator to mature the idea,” he said.