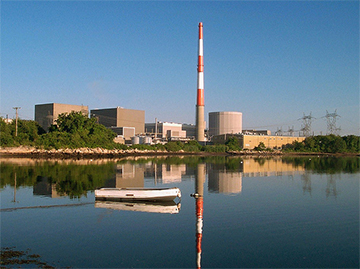 Power generation plants are often located near large sources of fresh water that they use as coolant for the power-generation cycle. This cycle looses efficiency as the ambient temperature rises.

A blistering summer this year has brought the energy-water nexus into sharp focus: how much power generation depends on water, and how much our water systems depend on power. We’ve had the hottest July on record in the continental United States, and so far 2012 ranks as the tenth-warmest year on record globally, according to the National Oceanic and Atmospheric Administration. The heat forced the shutdown of the Millstone Unit 2 reactor at the Dominion Nuclear Connecticut plant in Waterford, Connecticut … when the water temperature in Long Island Sound reached a toasty 76.7 degrees, over the 75 degree limit for the plant’s cooling water.

The interdependencies of water, power generation, food, and climate are not news. We’ve had shutdowns of power plants due to summertime heat for the past decade or more. But the problem does seem to be getting worse every year.

According to an excellent, detailed 2006 report by Sandia Labs (Energy Demands on Water Resources – Report to Congress on the Interdependency of Energy and Water), most power plants built before 1970 used an “open-loop” design, withdrawing 25,000 to 60,000 gallons of water per megawatt-hour (MWh) of generation, and discharging nearly all of it back to the source with around 300 gallons per MWh lost to evaporation. After 1970, most plants used a “closed-loop” design, which recycles the water through the plant. These plants withdraw less water—from 300 gallons/MWh for a typical coal plant to 720 gallons/MWh for a typical nuclear plant—but nearly all of it is lost to evaporation.

Petroleum refining also consumes a great deal of water: one to two billion gallons per day, according to the aforementioned Sandia study. Perhaps more usefully, the Argonne study puts water consumption for petroleum (which presumably includes water for petroleum extraction using enhanced oil recovery methods) in terms of water consumed per mile by passenger cars. Against 2,025,396 million vehicle-miles traveled by passenger cars in 2010, according to the Federal Highway Administration, the Argonne estimate works out to between 203 and 608 billion gallons of water per year consumed for petroleum.

The Sandia study also addresses the water demands of coal mining, ranging from 10 to 100 gallons per ton of coal mined (1 to 6 gallons per MMBtu). According to the EIA, the US mined 1,094 million short tons of coal in 2011, making the water requirement for coal mining between 10.9 and 109.4 billion gallons per year.

In sum, the freshwater demand of our current production and refining of fossil fuels might be around two trillion gallons per year at the high end.

Read the rest of the article at SmartPlanet.