Large-scale storage of low-pressure, gaseous hydrogen in salt caverns and other underground sites for transportation fuel and grid-scale energy applications offers several advantages over above-ground storage, says a recent Sandia study sponsored by the DOE Fuel Cell Technologies Office. Geologic storage of hydrogen gas could make it possible to produce and distribute large quantities of hydrogen fuel for the growing fuel cell electric vehicle (FCEV) market, the researchers concluded. Geologic storage solutions can service a number of key hydrogen markets since “costs are more influenced by the geology available rather than the size of the hydrogen market demand,” said Sandia’s Anna Snider Lord (in Sandia’s Geotechnology and Engineering Dept.), the study’s principal investigator.

As auto manufacturers and others move ahead with plans to develop and sell or lease hydrogen FCEVs and market demands for hydrogen fuel increase, the US will need to produce and store large amounts of cost-effective hydrogen from domestic energy sources, such as natural gas, solar, and wind, said Daniel Dedrick, Sandia’s hydrogen program manager. Such large-scale, practical hydrogen storage options, Dedrick said, are needed to realize the full potential of hydrogen for transportation. Additionally, installation of electrolyzer systems on electrical grids for power-to-gas applications, which integrate renewable energy, grid services and energy storage will require large-capacity, cost-effective hydrogen storage. 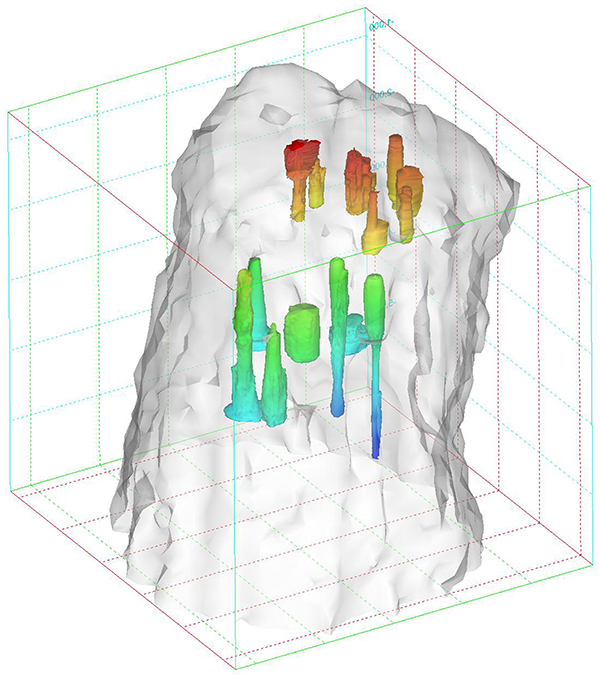 Salt caverns such as the one depicted here could provide a low-cost solution for the geologic storage of hydrogen. The colors in the illustration represent depth, with blue as the deepest part of the cavern and red the most shallow.

For years, Lord has been involved in the geologic storage of the US Strategic Petroleum Reserve, the world’s largest emergency supply of crude oil. For their study on geologic storage, Lord and her colleagues analyzed and reworked the geologic storage module of Argonne National Laboratory’s Hydrogen Delivery Scenario Analysis Model. To help refine the model, they studied storing hydrogen in salt caverns to meet peak summer driving demand for four cities: Los Angeles, Houston, Pittsburgh, and Detroit.

Hydrogen gas is a challenging substance to store. “Because it’s a smaller molecule than methane, for example, it has the potential to leak easier and move faster through the rock,” Lord said. With a salt cavern or hard rock cavern, “there are no permeability issues, there’s really no way anything can leak,” she said. “You can bring more product in and out, and that will, in the long run, decrease your costs.”

To examine geologic hydrogen storage costs, Lord’s team started by selecting geologic formations that currently store natural gas. Working with Sandia economist Peter Kobos (in Sandia’s Earth Systems Analysis Dept.), Lord analyzed costs to store hydrogen gas in depleted oil and gas reservoirs, aquifers, salt caverns, and hard-rock caverns. Depleted oil and gas reservoirs and aquifers could leak hydrogen, and cycling–filling a storage site, pulling hydrogen out for use and refilling the site–can’t be done more than once or twice a year to preserve the integrity of the rock formation, Lord said. With a salt cavern or hard rock cavern, “there are no permeability issues, there’s really no way anything can leak,” she said. “You can bring more product in and out, and that will, in the long run, decrease your costs.”

Their paper, “Geologic storage of hydrogen: Scaling up to meet city transportation demands,” was published in the International Journal of Hydrogen Energy.

Lord’s work adds to Sandia’s capabilities and decades of experience in hydrogen and fuel cells systems. Sandia leads a number of other hydrogen research efforts, including the Hydrogen Fueling Infrastructure Research and Station Technology (H2FIRST) project co-led by NREL, a maritime fuel cell demonstration, a development project focused on hydrogen-powered forklifts and a recent study of how many California gas stations can safely store and dispense hydrogen.