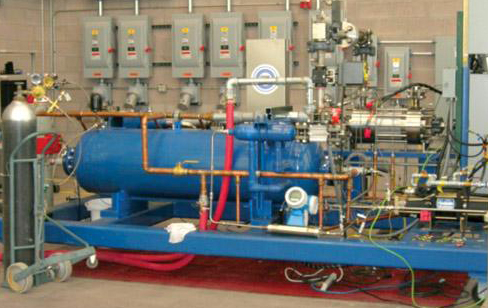 Sandia researchers have worked with this single compressor “research loop” to build a closed-loop Brayton-cycle turbine that uses supercritical carbon dioxide to improve the conversion of heat to electricity in turbine generators.

Sandia National Laboratories is seeking an industry partner to market a turbine system that could substantially improve energy efficiency in small modular nuclear reactors. The system uses carbon dioxide in a closed-loop “Brayton-cycle” turbine to crank up electric conversion from heat, said Gary Rochau, manager of the advanced nuclear concepts group at Sandia’s Nuclear Energy and Fuel Cycle Technologies Center. The Brayton-cycle system, developed by George Brayton more than 100 years ago, heats air in a confined space and then releases the compressed air to turn a turbine generator.

That’s not new, but replacing air in the system with “supercritical carbon dioxide” is, and that’s what adds efficiency, Rochau explained. Supercritical CO2 is the point where heated and compressed CO2 reaches an unusually dense state, between a gas and liquid. In that state, the CO2 converts a lot more heat to electricity than air in steam turbines, Rochau said. That offers more bang for the buck in power plants that can accommodate the system.

Read the rest of the article at the New Mexico Business Weekly.