The Institute of Electrical and Electronics Engineers (IEEE) Region 6: Southwest Area (encompassing New Mexico, Arizona, California, and Nevada) has selected Dr. Jose Luis Cruz-Campa (in Sandia’s MEMS* Technologies Dept.) as the recipient of their 2014 Outstanding Engineer Award for his “critical technical and leadership contributions to the development of microsystems-enabled PV (MEPV) technology and nano-patterned CdTe 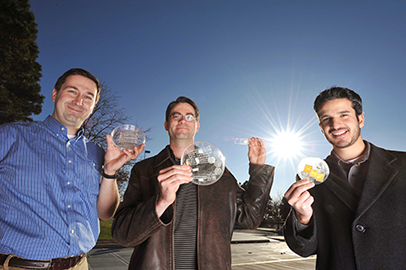 His MEPV work has received numerous awards, including a 2012 “R&D 100 Award” from R&D Magazine. His direct contributions led to the optimization of ultra-thin and micro-scaled PV and enhanced the efficiency of these devices from < 1% to almost 15%. These cells use 10–20 times less material, are flexible, and keep the same levels of efficiency as their conventional counterparts. Jose Luis is author/co-author to more than 40 technical publications and 22 patent applications of which 3 have been awarded by the US patent office.

Throughout Jose Luis’ career, he has exhibited strong leadership and a passion for promoting solar energy and materials science. He has been a presenter of hands-on solar energy and materials science activities in local middle schools, summer science camps, bilingual engineering workshops for kids, and at career days for K-12 students. In 2013, he worked with teachers from the Albuquerque Public Schools system to promote a MEMs education program. The Region 6 Outstanding Engineer Award was presented to Dr. Cruz-Campa at the IEEE Region 6 Southern and Southwest Area Meeting on October 25th in Los Angeles, California.