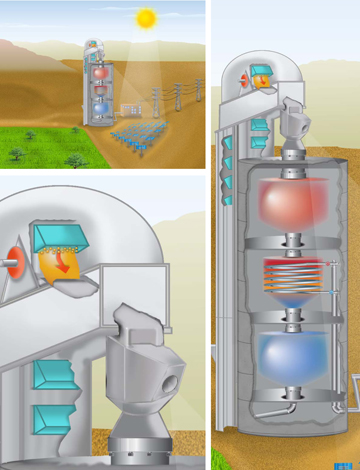 In the falling-particle receiver, sand-like particles fall from a bucket-elevator hopper, at the top of the receiver tower, past the focused solar energy from the heliostat array. The hot particles are kept in the top tank and released into the middle one as energy is required for power generation. In the middle tank, thermal energy is extracted for the power-generation cycle (not shown). The now cooler thermal-storage particles are released from the bottom of the middle tank into the lower tank where the bucket elevator scoops them out to return them to the top of the receiver tower. The bucket elevator’s speed and hopper size are optimized to deliver a particle density to the central receiver focal point that can capture the maximum available concentrated solar energy.

Thermal energy storage costs can be significantly reduced by storing heat at higher temperatures in an inexpensive medium (i.e., sand-like particles)—lowering the levelized cost of energy toward the SunShot goal of $0.06/kWh.

Once heated, the particles may be stored in an insulated tank and/or used immediately to heat the power cycle’s working fluid (e.g., steam, supercritical CO2, air). The falling-particle receiver appears well-suited for 10–100 MWe power-tower systems.

The research team is pursuing technical innovations in