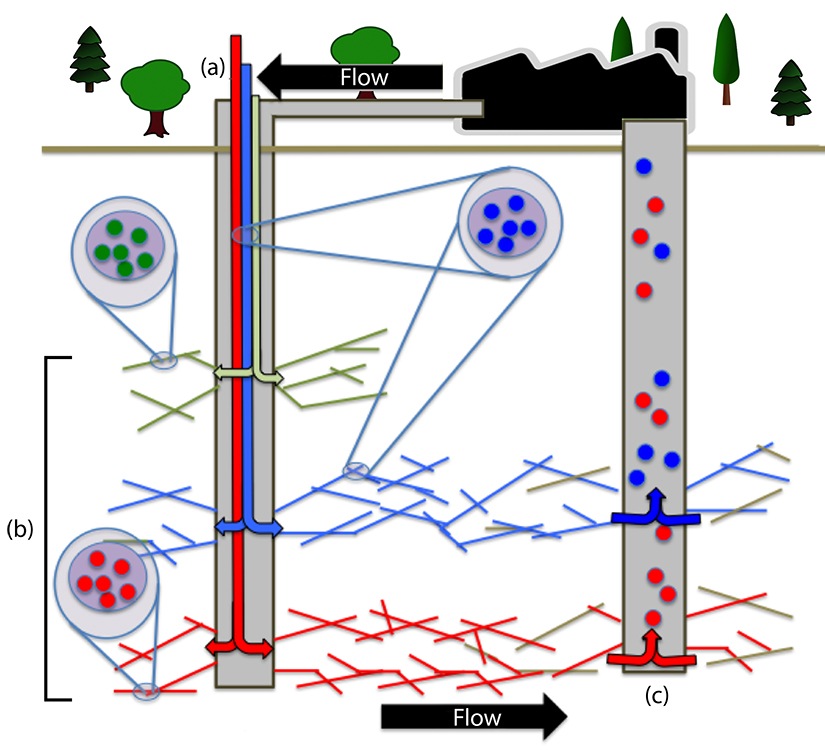 EGS are engineered reservoirs, created beneath the Earth’s surface, where there is hot rock but only limited pathways through which fluid can flow. During EGS development, underground fluid pathways are safely created and their size and connectivity increased. These enhanced pathways allow fluid to circulate throughout the hot rock and carry heat to the surface to generate electricity. 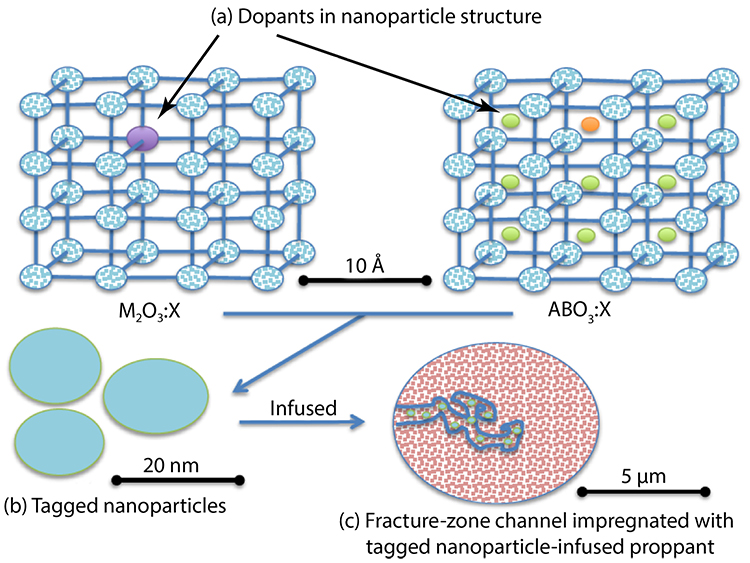 General concept of impregnated proppant. Illustration of (a) atomistic doping of (i) monocationic (M2O3:X) or (ii) polycationic (ABO3:X) would appear (b) on nanoscale as particles and (c) the proppant infused into one channel of the facture zone (many other such infusions not shown).

Sandia’s project, “Tagged Nanoparticles for Fluid Flow Monitoring,” will develop a system of nanoparticle-based chemical tags for EGS reservoirs. Sandia will lead a team in developing tagged nanoparticles loaded into proppants that will provide detailed information on EGS subsurface flow patterns. Controlled tagged nanoparticle release will occur through their specialized surface functionality and tailored proppant exterior coatings. Tagged nanoparticles carried inside a proppant combined with their controlled and predictable release will allow researchers (and later, operators) to determine which fracture zones are contributing to fluid flow as well as the produced fluids’ flow rates

The gradual release of the unique tags will mark reservoir location and flow rates for above-ground assessment. This previously unavailable information will provide engineers the ability to closely monitor many subsurface flows simultaneously, leading to production efficiencies, and will provide for longer-term monitoring without interfering with active wells.

Other project teams will focus on the integration of a variety of cutting-edge, complementary technologies and approaches in order to optimize EGS reservoir-parameter development and sustainability—such as fracture length, fracture aperture, fluid flow pathways, and in situ stress—in order to precisely engineer geothermal reservoirs.

These awards, up to three years in length, will initially focus on laboratory feasibility studies, and later yield integrated characterization methods and prototypes ready to be validated in the field.