Sandia Z-Machine researchers have produced a significant fusion-neutron output, using a method fully functioning for only little more than a year. The experimental work is described in a paper “Experimental Demonstration of Fusion-Relevant Conditions in Magnetized Liner Inertial Fusion,” published in the Oct. 6 Physical Review Letters online. A theoretical PRL paper, published on the same date, helps explain why the experimental method worked. 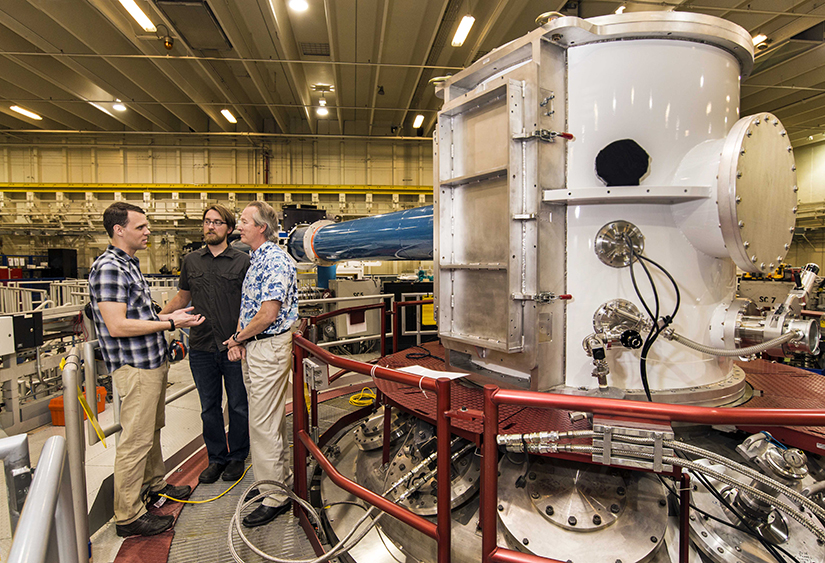 At the heart of Sandia’s Z Machine, Matt Gomez, left, presents an idea to Steve Slutz, right, while Adam Sefkow looks on. (Photo by Randy Montoya)

The project, dubbed magnetized liner inertial fusion (MagLIF) uses a laser to preheat hydrogen fuel, a large magnetic field to squeeze the fuel and a separate magnetic field to keep charged atomic particles from leaving the scene. Inertial confinement fusion (ICF) creates nanosecond bursts of neutrons, ideal for creating data to plug into supercomputer codes that test the US nuclear stockpile’s safety, security, and effectiveness. The method could also be useful as an energy source if fusion pulses can be sequenced like an automobile’s cylinders firing. 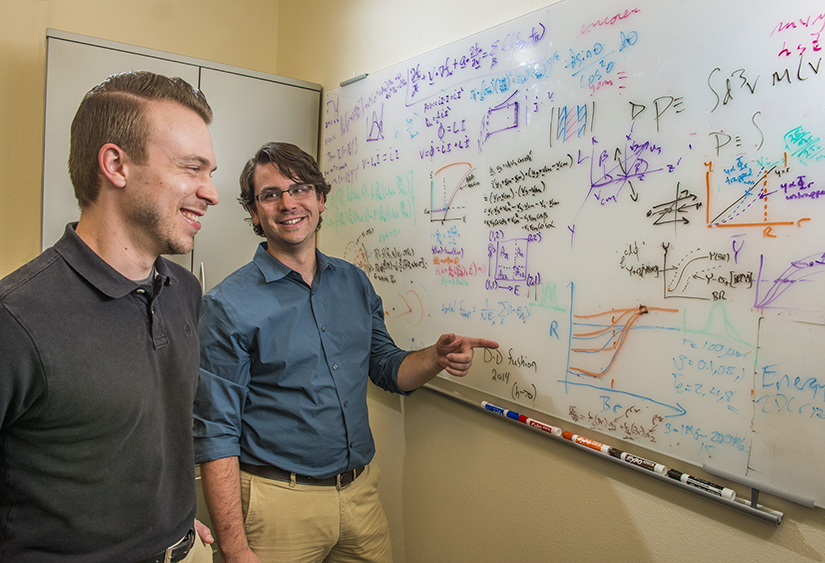 The two magnetic fields and the laser, focused on a small amount of deuterium (hydrogen with a neutron added to its nucleus), produce a trillion (1012) fusion neutrons (neutrons created by fusing atomic nuclei). Still, even with this large output, to achieve scientific break-even fusion—as much power out of the fuel as placed into it—1016 neutrons would have to be produced. The gap is sizable, but the technique is a toddler, with researchers still figuring out the simplest measures: how thick or thin key structural elements of the design should be and the relation between the three key aspects of the approach—the two magnetic fields and the laser.

According to the paper’s authors, the unusual arrangement of using magnetic forces both to collapse the tube and simultaneously insulate the fuel means researchers could achieve fusion-relevant conditions with a slower implosion than is usual for inertial-confinement concepts—allowing more time for fusible reactions to take place. The more benign implosion also means fewer unwanted materials from the collapsing liner mix into the fusion fuel, which would cool it and prevent fusion from occurring.