Sandia scientists have developed glitter-sized photovoltaic (PV) cells that have the potential to achieve the cost breakthrough necessary to move solar energy into widespread, portable use. 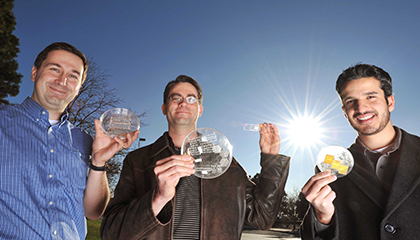 Miniaturized solar cells are produced using Sandia’s microsystems-enabled photovoltaics (MEPV) technology, which employs microdesign and microfabrication techniques common to the semiconductor, liquid-crystal display, and microsystems industries. The PV cells are then “printed” onto a low-cost substrate with embedded contacts and microlenses for focusing sunlight onto the cells.

The small size of the collectors makes versatile applications possible. “Eventually, units could be mass-produced and wrapped around unusual shapes,” said Greg Nielson, lead investigator for the project. If integrated into buildings, tents, and potentially clothing, MEPV technology would allow users such as hunters, hikers, and military personnel to recharge batteries for phones, cameras, and other electronic devices while in the field. Future applications could be as far reaching as satellites and remote-sensing devices.

Sandia’s role in MEPV development has been to design, fabricate, and test MEPV cells, modules, systems, and devices. A number of mutually beneficial partnerships were instrumental in bringing the technology to fruition. Partners including

provided the expertise required to move the technology forward as an increasingly efficient, reliable, and affordable energy alternative.