Sandia won five regional awards from the Federal Laboratory Consortium (FLC) for its work to develop and commercialize innovative technologies. It was the most FLC regional awards Sandia has won at one time. 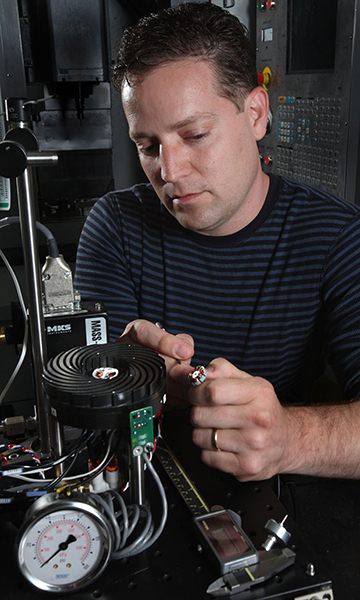 Sandia’s Jeff Koplow makes an adjustment to an earlier prototype of his Air Bearing Heat Exchanger invention. The technology, as known as the “Sandia Cooler,” will significantly reduce the energy needed to cool the processor chips in data centers and large-scale computing environments. (Photo by Dino Vournas)

“It’s quite an honor to receive recognition for our technology development and technology transfer work,” says Jackie Kerby Moore, manager of Technology and Economic Development Dept. and Sandia’s representative to the FLC. “It’s especially gratifying when we are recognized alongside our partners.”

The FLC is a nationwide network of more than 300 members that provides the forum to develop strategies and opportunities for linking laboratory mission technologies and expertise with the marketplace.

The Sandia Cooler reduces the energy needed to cool processor chips in data centers and large-scale computing environments, says Sandia researcher Jeff Koplow (in Sandia’s Energy Systems Engineering and Analysis Dept.). The technology has the potential to decrease overall electrical power consumption in the U.S. by more than 7%. 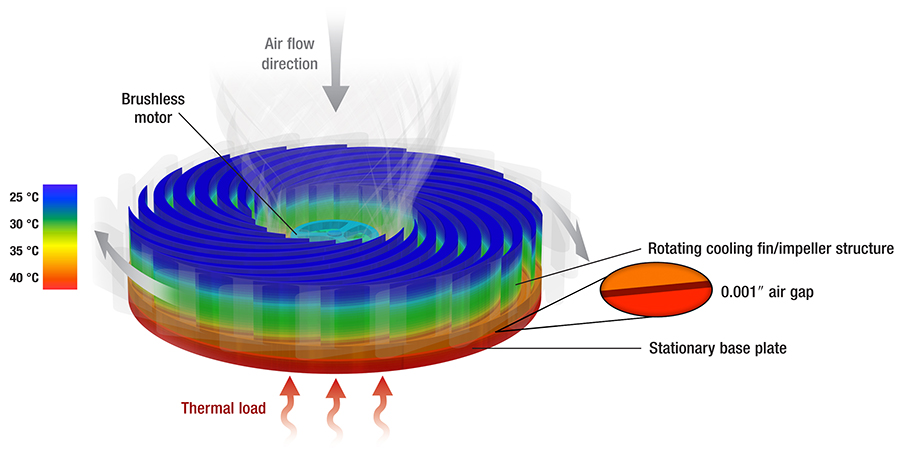 In this diagram of the Sandia Cooler, heat is transferred to the rotating cooling fins. Rotation of the cooling fins eliminates the thermal bottleneck typically associated with a conventional CPU cooler. (Diagram courtesy of Jeff Koplow)

The Sandia Cooler takes heat from a conventional CPU cooler and efficiently transfers it across a narrow air gap from a stationary base to a rotating structure. The normally stagnant boundary layer of air enveloping the cooling fins is subjected to a powerful centrifugal pumping effect, causing the boundary layer thickness to be reduced to 10 times thinner than normal.

The cooler offers benefits in other applications where thermal management and energy efficiency are important, particularly heating, ventilation, and air-conditioning. It won an R&D 100 Award in 2012. One license has been issued and about a dozen companies are interested in the technology. Prototypes are being developed for the interested parties.