Sandia and Los Alamos Teams Gear Up for Hurricane Season

Sandia and Los Alamos Teams Gear Up for Hurricane Season 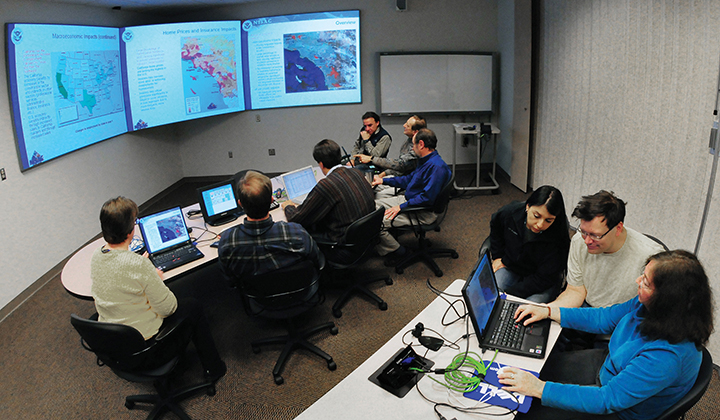 National Infrastructure Simulation and Analysis Center (NISAC) teams of infrastructure modelers and analysts, such as this one, work to provide a crisis response to the Department of Homeland Security for national disasters such as hurricanes. (Photo courtesy of NISAC)

The Department of Homeland Security’s National Infrastructure Simulation and Analysis Center (NISAC), jointly housed at Sandia and Los Alamos national laboratories, studies how hurricanes and other disasters disrupt critical infrastructure, such as roads, electricity, and water systems. With the onset of hurricane season, NISAC has two jobs: conducting annual “hurricane swath” analyses of probable impacts on the Gulf Coast and East Coast and providing rapid analyses of crisis response in the face of an imminent hurricane threat to the U.S.

A swath analysis looks at how a hurricane might interrupt critical services and at impacts to infrastructure specific to an area, such as petroleum and petrochemical industries in Houston or financial services in New York City. It also looks at such things as the economic impact of the storm or how it could upset food deliveries. Federal officials pull swath analyses off the shelf when a hurricane seems likely to hit a particular place. They used the New Orleans report a few days before Hurricane Isaac headed toward that city last August. “While it was too far out for us to do our analysis, they could use the report as a first cut,” said Dan Pless (Policy and Decision Analytics Dept.), NISAC program lead at Sandia.

Each report uses a “reasonable bad scenario” that would be possible in the particular area, with local officials deciding what scenario would be most useful for disaster planning, said Pless and Mark Pepple (Chemical and Biological Systems Dept.), NISAC fast-response lead at Sandia. For example, a Category 5 hurricane isn’t likely in New York City because colder waters dampen hurricane strength, but a Category 3 is within reason. “These storms form in the Caribbean, they form in the Gulf. They can get quite strong down there,” Pless said. “They don’t form in the North Atlantic. They have to travel there.” The analyses—also useful in other natural disasters—consider impacts to the infrastructure, the population, and the economy, Pless said.

The team also responds to a flurry of questions from DHS just before landfall. For Hurricane Ike, Pless said, officials wanted to know which large Houston-area water treatment plants were most likely to lose power and would need one of three available Federal Emergency Management Agency (FEMA) generators. For Sandy, NISAC’s report identified subways in the storm surge zone and did some power outage modeling. NISAC’s analyses complement those performed by the DOE or other agencies by providing unique evaluations of how damage to one type of infrastructure, such as power lines, would impact other infrastructures. As the designated sector-specific agency for the energy infrastructure sector, DOE’s Office of Electricity Delivery and Energy Reliability helps prepare for and respond to energy-related emergencies like Hurricane Sandy.