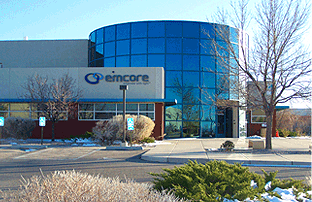 The EMCORE headquarters building in the Sandia Science and Technology Park.

MODE (MicroOptical Devices) was an Albuquerque-based start-up company founded by a group of Sandians who left Sandia under a special entrepreneurial program. MODE was purchased in 1997 by EMCORE, a New Jersey company that has worked with Sandia since the early 1990s.

Upon acquiring MODE, EMCORE became the first company to build a facility in the Sandia Science & Technology Park in 1998 for their Photovoltaics Division, which builds solar cells for the space industry.

EMCORE is a leading provider of compound semiconductor-based components for the fiber optics and solar power markets. The solar cell technology that EMCORE licensed from Sandia serves as the basis for their high-efficiency solar cells used in their CPV systems, which are used to generate solar power for terrestrial applications. In June 2009, EMCORE signed an agreement with the Public Service Company of New Mexico (PNM) to become the first company to join PNM’s Distributed Energy Solar Power Program.

The Sandia and EMCORE partnership has created hundreds of new, high paying jobs and has made an important contribution to the local technical community as well as the economy. Through technology transfer and commercialization, Sandia gained private sector funding for research, a stronger local research community, and products embodying Sandia technology, all of which support its national security mission.

Read more about the Sandia-EMCORE partnership.