Resolving a Key to How Stars Transmit Energy

Sandia physicist Jim Bailey observes a wire array that will heat foam to roughly 4 million degrees until it emits a burst of X-rays that heats a foil target to the interior conditions of the sun.

Working at temperatures matching the interior of the sun, researchers at Sandia National Laboratories’ Z machine have been able to determine experimentally, for the first time in history, iron’s role in inhibiting energy transmission from the center of the sun to near the edge of its radiative band.

Because that role is much greater than formerly surmised, the new, experimentally derived amount of iron’s opacity helps close a theoretical gap in the Standard Solar Model, widely used by astrophysicists as a foundation to model the behavior of stars. “Our data, when inserted into the theoretical model, bring its predictions more closely into alignment with physical observations,” said Sandia lead investigator Jim Bailey (in Sandia’s Radiation and Fusion Experiments Dept.). His team’s work appeared recently in the journal Nature. 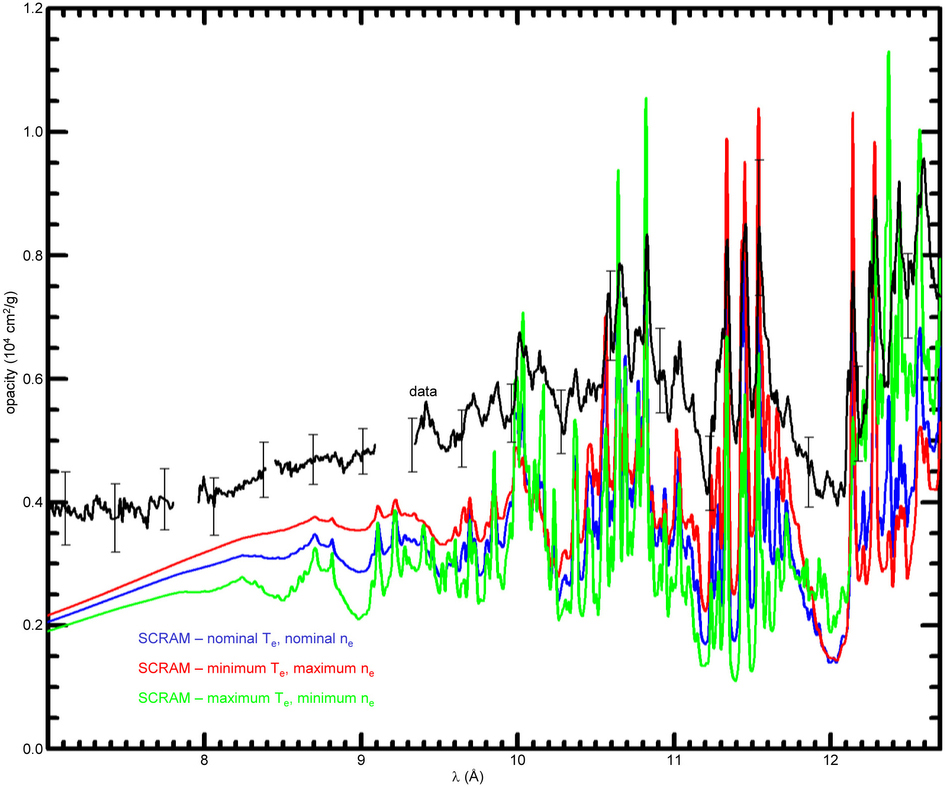 The measured iron opacity at Te = 2.11 × 106 K and ne = 3.1 × 1022 cm−3 is denoted with a black line, with error bars corresponding to the 1σ uncertainty. SCRAM calculations are shown at the nominal conditions in blue, at the minimum Te, maximum ne in red and at the maximum Te, minimum ne in green. The minimum Te, maximum ne values lead to the lowest ionization and the maximum Te, minimum ne values lead to the highest ionization.

Getting accurate data has been difficult, as “the inside of a star is one of the most mysterious places in the universe,” Bailey said. “It’s too opaque for distant instruments to see inside and analyze reactions within it, and too hot to send a probe into it. It has also been too difficult to run tests under appropriate conditions in a laboratory. So the physics that describes how atoms, embedded in solar plasma, absorb radiation, has never been experimentally tested. Yet, that process dominates the way energy generated by nuclear reactions in the sun’s interior is transported to the outside.

“Fortunately, in our Z experiments, we can create temperature and density conditions nearly the same as the region inside the sun that affects the discrepancy the most—the edge of the zone where radiative energy transport dominates—in a sample that’s big enough, lasts long enough, and is uniform enough to test. We used that new capability to measure the opacity of iron, one of a few elements that plays the most important part in radiative energy transfer.”

Iron is important because, of all the elements abundant in the sun, it maintains the highest number of bound electrons essential in radiative energy transfer, and thus has a large effect on the outcome of solar models.

The work was sponsored by the National Nuclear Security Administration and the DOE Office of Science.