This Sandia National Laboratories project, led by the University of Minnesota (UMN) is divided into three sections: turbine-scale modeling, wind-farm-scale modeling, and coupling of models across scales. This work aims to develop and validate state-of-the-art computational tools capable of simulating atmospheric turbulence and wave effects in offshore wind farms. The main outcomes of this project will be a suite of computer codes and related supporting documentation as well as experimental data sets for model validation. Both the computer codes and experimental data will be made publicly available to the broader wind energy community and industry. 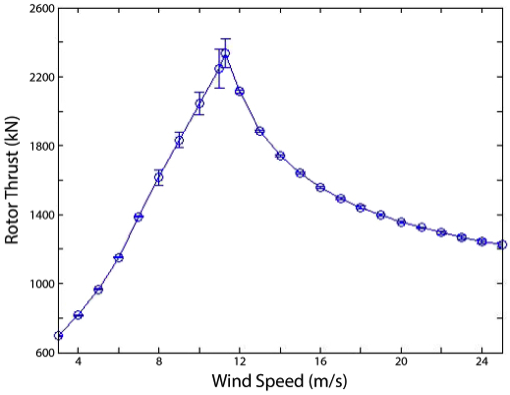 Thrust curve for Sandia’s 13.2 MW reference turbine design, developed as part of the large scale rotor design project. This is the turbine modeled for the UMN/SNL project.

State-of-the-art numerical models are limited in their ability to model floating offshore wind turbines because the coupling between wind and waves is one-way. This project will overcome current modeling limitations by:

A kickoff meeting for all project collaborators was organized in FY12. Sandia defined the floating-platform design metrics and determined three or four possible offshore-wind floating platform designs, once each collaborator’s modeling needs were understood. Based on the predefined design metrics, a scaled semisubmersible floating platform was chosen.

In FY13, floating platform model’s wave structure interaction was coupled with the wind-turbine model, and experimental data from UMN’s St. Anthony Falls Laboratory (SAFL) wave flume was collected. The semisubmersible design was modeled in ANSYS-AQWA and the UMN coupled wind/wave code, thus characterizing the floating platform’s response was six degrees of freedom (6DOF) when subject to waves representative of the site’s wave climate. The wave flume experiments will be completed and the resulting data set will then be used for model validation in FY14. 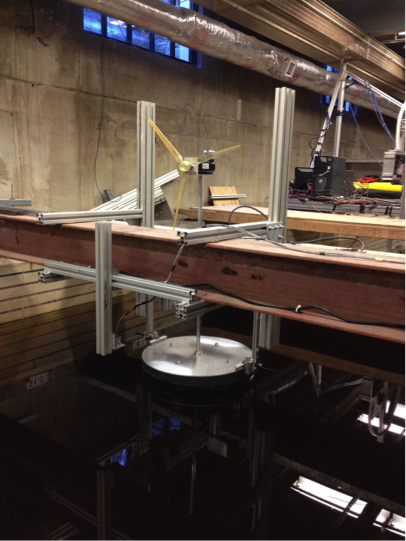 Sandia and UMN will define the wind farm’s configuration based on the site’s wind and wave climate. Once the wind farm’s layout has been determined, sandia will model the wind farm in FY14. Also in FY14, Sandia will conduct wind-farm wind tunnel experiments—preliminary design of which was completed in FY13. This large-scale wave model will then be coupled with UMN’s large-scale wind model, and the final product of this work package will be a coupled wind/wave model complete with validation from laboratory experiments.

Coupling of Models Across Scales

Sandia will work to couple the wind/wave models to include both turbine-scale and farm-scale interactions. This fully coupled model will then be incorporated into wind and wave forecasting models, specifically the Weather Research and Forecasting model, and the Regional Ocean Model System. The final product will be a multiple-scale computational model for simulating floating wind farms.

In FY12, Sandia organized a kickoff meeting for the project hosted in Albuquerque. A review of three different platform types (tension-leg platform, semisubmersible, and spar buoy) was performed based on a literature review of existing technologies. After evaluating these platforms based on design metrics (stability, motion, depth, installation, and cost), a semisubmersible platform was chosen.

In FY13, Sandia hosted a UMN PhD student to collaborate on the coupling of the wind and wave models. Sandia’s role was to provide the wave boundary conditions to UMN, guidance on wave theory, and direct comparison to boundary element method, thus ensuring that the code coupling accurately represented the physics. This resulted in a fully coupled wind and wave model, capable of resolving the air-water interface and modeling a floating platform in waves. 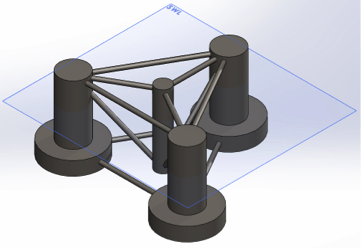 Model element for the semisubmersible platform used to finalize turbine (based on the Sandia 13.2 MW reference turbine) and platform (based on the Princple Power Inc. WindFloat platform) specifications for the project.

Sandia and UMN have also been working together to define the experimental test plan for the SAFL wave flume tests of the floating offshore wind turbine and platform. Sandia also defined the scaled combined wind and wave climate for potential Pacific Northwest and a Maine deployment sites. The experimental testing on the device scale was completed at SAFL in FY14, which Sandia supported.