How do CSP plants produce electricity from the sun?

CSP plants (dish engine, power towers, and parabolic trough systems) all operate the same way. They collect and concentrate the energy from the sun onto a solar receiver where the heat is absorbed and used to drive a heat-engine generator. Power towers and parabolic trough plants effectively replace the burning of coal in a pulverized coal power plant. The heat collected from these two technologies is used to generate steam, which is provided to a conventional Rankine-cycle power plant with a turbine and generator to produce electricity. A dish engine system operates differently. The receiver, engine and generator are located at the focal point of the dish where the heat is absorbed and converted to mechanical energy to drive the generator.

Could I purchase a trough, a power tower or a dish/engine system to provide electricity for my home?

Unfortunately, no. These systems are being developed to replace utility-scale, central generation facilities like large pulverized coal power plants. In order to be cost competitive, CSP systems need to be at least 100 MW capacity and larger. Therefore, it is unlikely that you will ever be able to purchase a system that would be sized appropriately for your home (about 3 to 5 kW capacity or 1/20,000th the size of a 100 MW plant).

How do parabolic troughs, power tower heliostats, and dishes concentrate the solar energy over the course of a day?

As you might expect, each of these technologies operates a little bit differently. A parabolic trough has a cross-section that, as the name suggests, is parabolic; it focuses the sun’s energy along a line located at the focus of the parabola. In order to collect energy over the course of a day, the trough must track the sun. Because of its geometry, i.e, it is a long trough-shaped object, it is normally oriented on a north-south axis and tracks the sun from east to west over a day. A power tower utilizes a field of heliostats to track the sun and position their reflected beams on a motionless, centrally located receiver. Each heliostat has mirrors with a slight curvature to focus the sunlight. In order to reflect their images onto the central receiver, the heliostat must track the sun in two axes. To better understand how a heliostat tracks, consider the plane formed by the sun, the center of the heliostat, and the central receiver and the angle this plane makes at the center of the heliostat. In order to properly reflect and concentrate the sunlight onto the central receiver, each heliostat must track the sun by precisely bisecting this angle over the course of each day. Heliostats track differently from one another and the same heliostat tracks follows a different path each day of the year based on the sun’s position in the sky. A dish is a two-dimensional paraboloid that focuses at a point or region. Much like a heliostat, it must track the sun in two axes, but it is much simpler. A dish effectively tracks the sun in such a way that its axis (the line from the center of the parabolic reflector through the center of the solar receiver) is always pointed directly at the sun. In this way the receiver is always illuminated by the reflected, concentrated solar beam.

Today the cost of electricity from CSP plants is in the range of 14 to 17 ¢/kWhr of power generation. As a comparison, the cost electricity from a new pulverized coal plant would be 7 to 9 ¢/kWhr or about one-half the cost. Utilities in the southwest are starting to consider CSP systems in order to meet state-mandated Renewable Portfolio Standards aimed at clean power generation. Many southwest states have incentive programs that help address the difference between the cost of CSP-generated and conventional electricity. The Federal government also has an incentive in the form of an investment tax credit that applies to these systems.

How much land does a CSP plant use?

In general terms, a CSP plant will require about 5 acres of land per MW of capacity. This varies a little bit with the technology and can be impacted by the amount of thermal storage designed into a plant.

Does a CSP plant continue to produce electricity when the sun doesn't shine and at night?

The differentiating characteristic of concentrating solar trough and power tower plants is that they can accommodate thermal energy storage, which allows them to produce electricity at night and when the sun doesn’t shine. In these plants the solar concentrator field is designed to provide more solar power than the turbine generator will provide to the grid as electricity. This “excess” thermal energy is stored as heat and then used when it is needed, at night or on cloudy days, to generate electricity.

Is the U.S. the only country developing CSP systems?

No, there are a number of countries around the world supporting the development and deployment of CSP utility-scale power systems; i.e., Spain, Israel, Morocco, Algeria, Australia, Egypt, Germany and the UAE.

What materials are used in the solar receivers?

As you might expect, the solar receivers are very important components because they are at the interface between the concentrated solar energy and power system. They must have very high efficiency — absorb as much of the solar energy as possible and not lose it through radiation and convection, operate intermittently throughout the day, and cycle on a daily basis. Trough receiver tubes have special absorber surfaces with a high absorption for the solar energy spectrum and low emission for the infrared (radiation at lower temperatures), and they are encased in a vacuum covered with a transparent glass cover. As the temperature and materials requirements are not too severe (~ 730 F), the receiver material is a conventional stainless steel. For power towers, the receivers must absorb megawatts of solar power and transfer it to an intermediate working fluid or to steam. In water-steam receivers, the operating conditions are driven by the high temperature and pressure (1000 F, and 1500 psi). The tubes tend to be small diameter, thick walled and made of stainless steel or high-temperature alloys. Other types of tower receivers utilize an intermediate molten sodium- potassium-nitrate salt material. These systems also operate at 1000 F but, because of the low volatility of the molten-salt mixture, the pressure is much lower. Typically, due to reliability requirements, these receivers will be made of high temperature stainless steel alloys. Dish receivers operate under the most severe heat flux and temperature conditions at about 1500 F and utilize high-temperature steel alloys. There have been some designs discussed that would utilize ceramics in the receiver but none has ever been built.

What are mirrors on CSP systems made of?

The mirrors on most CSP systems are made of silvered glass because of its high solar reflectivity (93%), relatively low cost, and durability. The most common construction technique involves laminating a thin, silver glass mirror to a heavier glass backing structure that has the appropriate curvature required by the concentrator. Other materials that have been used as the reflectors in solar concentrators are silvered polymer films (similar to peanut bags but with silver in place of the aluminum) and augmented aluminum reflectors.

Do dust, rain, snow, or hail damage the mirrors?

Dust accumulation must be removed when it significantly impacts the amount of solar energy reflected to the receiver. Rain and snow actually help keep the mirrors clean by washing away accumulated dust. Hail and dust storms do not generally pose a problem to the glass reflectors by scratching or breaking them. Loading on concentrators due to high winds has caused most of the damage to glass collectors in the field and even this is limited to a small percentage of the total concentrator area.

How much land does the NSTTF occupy and what did the facility cost?

The National Solar Thermal Test Facility (NSTTF), located in Albuquerque, New Mexico, is operated by Sandia National Laboratories for the U.S. Department of Energy. The test facility is devoted to the development and test of next-generation concentrating solar power systems (also known as solar thermal power systems). The NSTTF is a designated by the DOE a User Facility, which means that the facilities and staff are available for use by U.S. industry, universities, other laboratories, state and local governments, and the general scientific community. The NSTTF was built in the late 1970s on 117 acres and comprises an 8 acre heliostat field and power tower, a molten-salt test loop, a rotating platform for solar thermal testing of trough concentrators, a solar furnace, facilities for dish engine testing, an engine test facility, and numerous buildings and specialized test equipment. Estimated at about $120 million, the NSTTF has been used in support of the DOE solar program as well as by other customers.

How much electricity can Sandia's CRTF produce?

The Central Receiver Test Facility (CRTF) field contains 222 heliostats (about 9 acres) that can direct up to 5 megawatts of solar thermal power onto a test item. It was designed to be a flexible test bed for evaluating central receiver concepts and to perform other types of solar-related testing. A commercial power tower would never be built like the CRTF because it would be too expensive. The CRTF has never been operated as a power generation facility but, if it were, it would produce about 1 MW of electricity, enough to power about 500 homes when the sun is shining.

How big is the CRTF tower?

The CRTF tower is 200 feet tall with an 8-foot-thick foundation 50 feet below ground. The tower’s large elevator can lift test items weighing up to 200,000 pounds to any one of three, north-facing test bays or to the top of the tower where it can be illuminated by the sunlight from the heliostat field.

How hot is the solar beam at the CRTF?

Can the solar beam be used as a 'star wars' weapon?

No. It is not possible to target on fast moving objects and impractical to focus the sun at very long ranges that change. Even if we could overcome these technical difficulties, we would have only a “fair weather” weapon that could operate only when the sun shines.

Has any testing at the NSTTF had practical results?

Yes, more than 13 different central receiver concepts have been tested at the CRTF and numerous heliostat, trough, and dish designs tested. The receiver and heliostats tested at the NSTTF were used at Solar One and later at Solar Two, a 10-megawatt test facility that was located near Barstow, California. National defense programs have benefitted from the use of the CRTF solar beam to inexpensively simulate heating effects that can otherwise be generated only with very costly electrical heating equipment. NASA has performed numerous tests at the CTRF to evaluate materials for the space shuttle and other aerospace applications under high heating conditions. An international consortium for research laboratories has used the CRTF for evaluating Cherenkov radiation.

Please note that by clicking the links below, you will be redirected to a non-federal Web site. The following sites are subject to the DOE disclaimer.

A picture says a thousand words, especially on the World Wide Web. Both Sandia National Laboratories and the National Renewable Energy Laboratory (collectively known as “SunLab” within the CSP Program) maintain extensive databases of photographs, many of which are available for public use. These photos illustrate the world-class research being conducted at the national laboratories and showcase the cutting edge technologies that are shaping the way energy will be produced in the 21st century. 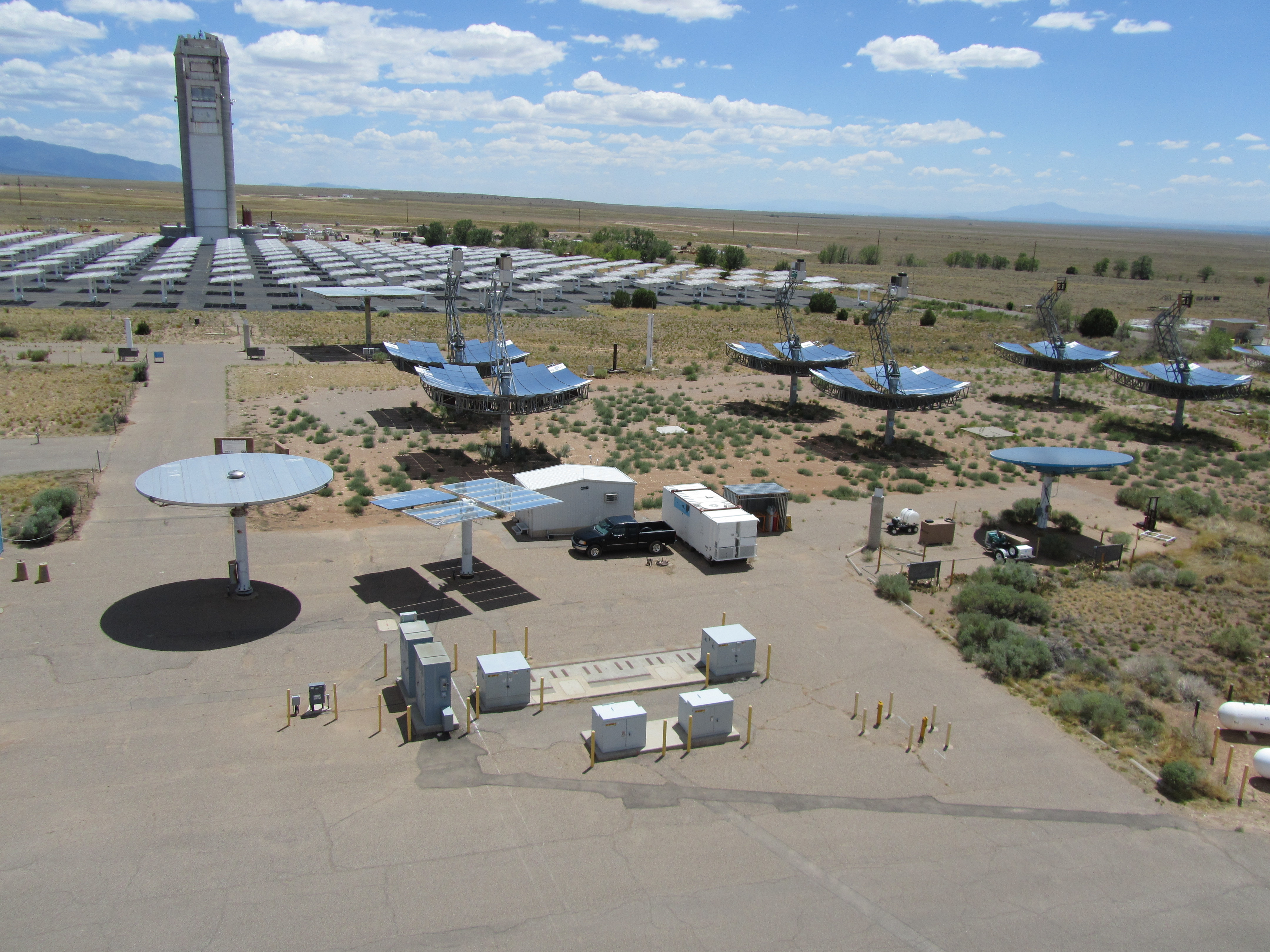