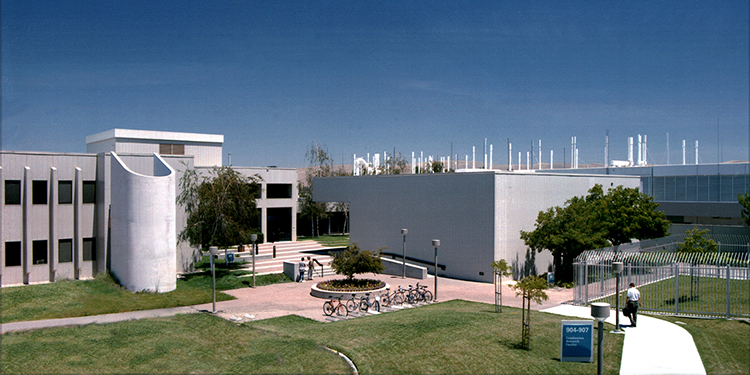 Researchers at Sandia and Argonne national laboratories have demonstrated, for the first time, a method to successfully predict pressure-dependent chemical reaction rates—an important breakthrough in combus­tion and atmospheric chemistry that is expected to benefit auto and engine manufacturers, oil and gas utilities, and other industries that employ combustion models. A paper describing the work, performed by researchers at Sandia’s CRF and Argonne’s Chemical Sciences and Engineering Division, is featured in a recent edition of Science.

The ability to predict the pressure dependence of chemical reaction rates would greatly enhance the kinetic modeling of processes such as combustion and atmospheric chemistry. This pressure dependence is intimately related to the rate of collision-induced transitions in energy (E) and angular momentum (J). The authors present a scheme for predicting this pressure dependence based on coupling trajectory-based determinations of moments of the E,J-resolved collisional transfer rates with the two-dimensional master equation (2DME). This completely a priori procedure pro­vides a means for proceeding beyond the empiricism of prior work. The requisite microcanonical dissociation rates are obtained from ab initio transition state theory. Predic­tions for the CH4 = CH3 + H and C2H3 = C2H2 + H reaction systems are in excellent agreement with experiment. 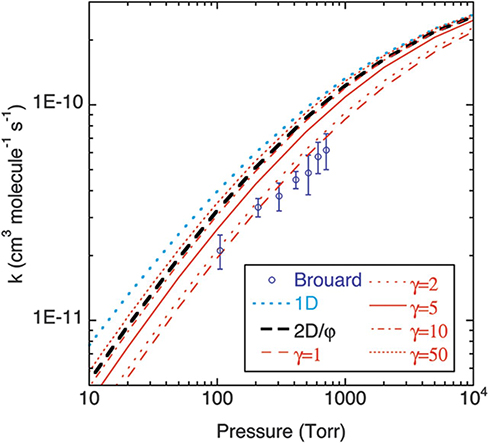 Plot of the pressure-dependent rate constant for CH3 + H (+He) → CH4 (+He) at 600 K for various approximate models: the simple separable two-parameter two-dimensional master equation (2DME) model as a function of the ΔJ range parameter γ, the one-parameter 2D/ϕ model, and the one-parameter 1DME model. (Symbols denote experimental results and error bars from Brouard et al.).

Combustion scientists have worked for years to better understand the thousands of chemical reactions that take place during the combustion process, said Sandia’s Ahren Jasper (in Sandia’s Combustion Chemistry Dept.), the study’s lead author. As scientists determine and understand the speeds and outcomes of more and more of these reac­tions, he said, they can use models to more fully character­ize what’s occurring inside an engine, and thus better pre­dict combustion efficiency and the emissions formed during combustion. A more detailed, fundamental understanding of the chemistry of combustion, in turn, may lead to cleaner and more efficient strategies in automotive vehicle and fuel design.

Many of the key steps underlying gas-phase combustion involve elementary chemical reactions that are strongly pressure-dependent, and researchers who develop com­bustion models require detailed descriptions of these reactions. While significant progress has been made over the years in understanding combustion chemistry, the outcome and rates of pressure-dependent chemical reactions—those that depend on the pressure of the gas in the engine—have been very difficult to predict. These reactions depend on the pressure because the redistribution of energy and angular momen­tum that occurs when the reacting molecules collide with other gas molecules changes the speed and out­come of the reactions.

The team focused on modeling the collisions of molecules in atomistic detail and characterizing the transfer of energy and angular momentum that takes place as a result of those collisions. “We succeeded by using more accurate models for describing the interaction of the colliding species and by focusing on only those aspects of energy transfer that are most relevant in determining the reaction rate,” Jasper said. This allowed the researchers to develop a detailed description of collision outcomes. Jasper and his colleagues then were able to obtain that collision outcome information using direct “classical trajectories” that explicitly describe the motion of the atoms in the molecules, and to use this information in calculating chemical reaction rates.

The work was supported by the Department of Energy’s Office of Science.