Post-Processing and Analysis of Wake Measurements Around a Scaled Turbine

Post-Processing and Analysis of Wake Measurements Around a Scaled Turbine 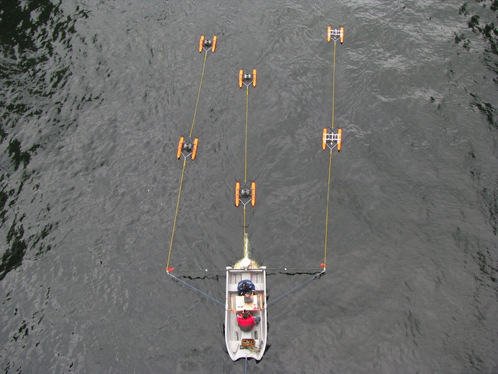 Sandia and the Univ. of Washington recently (jointly) reprocessed data from a UW wake-measurement campaign to include power-performance (Cp-TSR) and thrust (Ct-TSR) data for comparable velocity conditions obtained in the September 2012 field campaign. Their reanalysis shows that normalized wake-recovery metrics (i.e., velocity deficit vs turbine diameters downstream) suggest that wake recovery is independent of inflow velocity (in the range of 1–2 m/s) and largely independent of the turbine’s operating state (i.e., position on the Cp-TSR curve relative to peak performance). In comparison with wake studies behind turbines in flume facilities, the wake generated during the tow test generally recovered more quickly. However, additional analysis will reveal the nature of the recovery and the best ways to compare test results. Additionally, this data set is being evaluated for use as a Sandia-EFDC validation test case.

In September 2012, the UW collected wake data behind a scaled, vertical-axis cross-flow turbine using an array of catamaran-mounted acoustic Doppler current profilers. The test turbine was attached to a small skiff and towed by a larger boat in a lazy figure-eight pattern on Seattle’s Lake Washington. However, this test involved an incomplete characterization of associated turbine performance and turbine thrust.