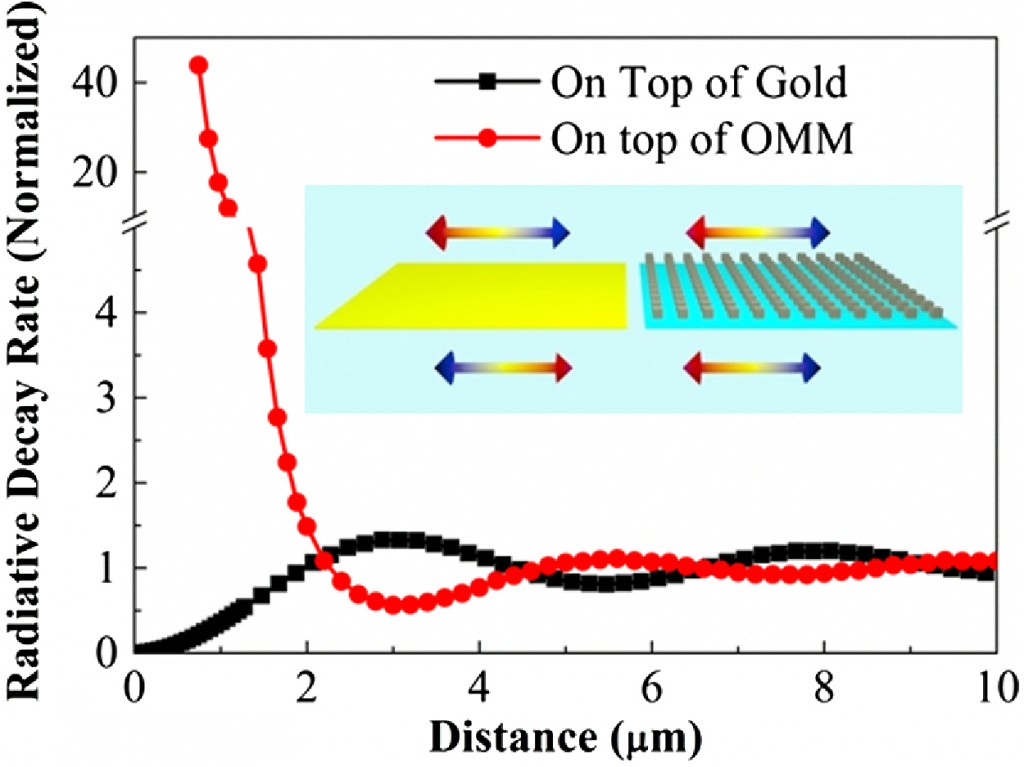 Normalized radiative decay rate of a transverse-electric dipole oscillating at the magnetic resonance frequency as a function of the dipole–surface separation for both a 5×5 array approximating our optical magnetic mirror (OMM, red curve) and a gold surface (black curve). The distance of the dipole from the OMM is calculated using the center of the cubic resonator as distance “0,” which is in agreement with our theoretical calculation. First, the oscillatory dependence on distance is shifted by about half a period. Second, while the emission from the dipole is quenched very close to the gold surface, the dipole emission near the magnetic mirror is enhanced even for very small distances. Inset: a schematic of an electric dipole placed on top of a typical mirror and its reversed image dipole (left) and a schematic of an electric dipole on top of a dielectric magnetic mirror and its unreversed image dipole (right) at the magnetic dipole resonance.

An optical wave’s reflection from metal arises from strong interactions between the optical electric field and the metal’s free carriers and is accompanied by a phase reversal of the reflected electric field.

A far less common route to achieving high reflectivity exploits strong interactions between the material and the optical magnetic field to produce a “magnetic mirror” that does not reverse the phase of the reflected electric field.

In their paper, “Optical magnetic mirrors without metals” in Optica, authors

report on developing a new type of mirror that isn’t shiny, and instead reflects infrared light by using a magnetic property of a nonmetallic metamaterial.

The enhanced absorption and emission of transverse-electric dipoles placed close to magnetic mirrors can lead to exciting new advances in sensors, photodetectors, and light sources.