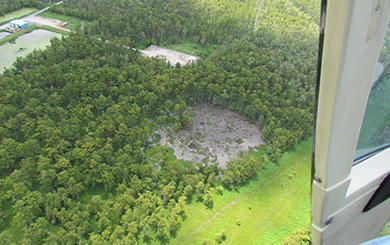 This August 3 aerial shot released by the Louisiana Department of Natural Resources shows the sinkhole near Bayou Corne, Louisiana, which has grown since it first began forming in August. Sandia researcher David Borns is part of a group of experts providing technical evaluations about possible causes and remedies for the sinkhole. (Photo courtesy of Louisiana Department of Natural Resources)

Secretary Stephen Chustz, from the Louisiana Department of Natural Resources (LADNR), asked David Borns (in Sandia’s Geotechnology and Engineering Dept.) to serve on the blue ribbon commission (BRC) that was formed by Governor Bobby Jindal to provide science-based public safety recommendations regarding the sinkhole in the Bayou Corne area. The BRC will help LADNR continue making progress to protect the Bayou Corne community and environment.

According to Secretary Chustz, “Members of the Commission hail from all over the world, and we’ve brought together the best knowledge available to work on these safety recommendations.” The BRC will study three primary areas: “the levels of shallow gas in the aquifer, the current and future stability on the western side of Napoleonville Salt Dome, and the management and containment of the sinkhole coupled with the determination of potential void spaces below the sinkhole.”