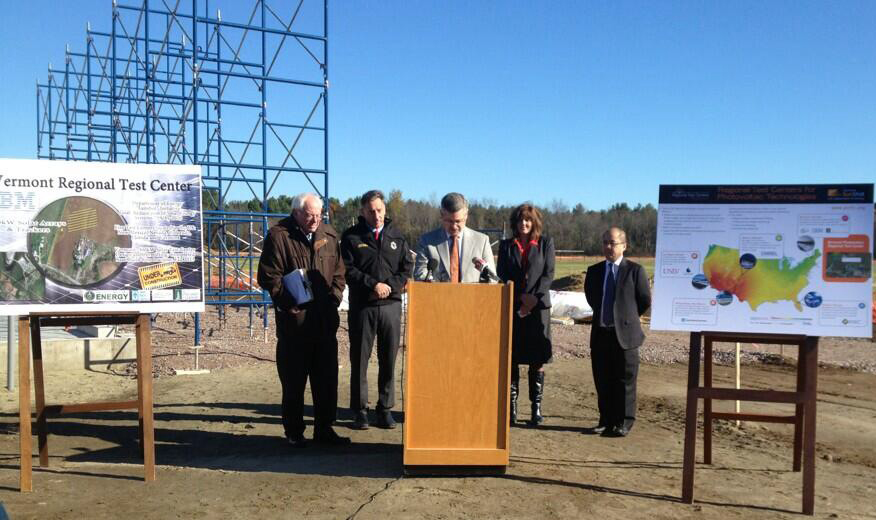 Sandia’s Steve Rottler delivers his remarks at the groundbreaking ceremony for the DOE-funded photovoltaic Regional Test Center (RTC) on the IBM campus in Williston, Vermont.

U.S. Senator Bernie Sanders (I-VT) joined representatives of Sandia, IBM, and the DOE in early November to announce the launch of the Vermont Photovoltaic Regional Test Center (RTC). The RTC will enable research on integrating solar panels into the statewide smart grid and help reduce the cost of solar power. The Vermont RTC is one of five such facilities in the U.S. (including another at Sandia’s NSTTF) that will provide critical performance data on photovoltaic (PV) systems, including determining the effectiveness of operating in a climate with harsh winters, significant precipitation, and dramatic weather changes.

“This collaboration between the DOE, Sandia, and IBM to bring a state-of-the-art photovoltaic testing center to Vermont is a clear example of how Vermont is leading the way to transform our economy from fossil fuels to renewable energy,” said Sanders, who serves on the Senate energy and environment committees. The two-acre testing site is on IBM-owned land in Williston, Vt., and will initially accommodate up to 300 kW of solar power.

“Thanks to the vision of Senator Sanders, the leadership of the Department of Energy, and technical commitment from IBM, this Regional Test Center will help realize a national vision for research, demonstration and testing of cutting edge solar technology,” said Steve Rottler. “Sandia National Laboratories is honored to provide its technical expertise in photovoltaic systems validation and integration to manage the facility, test and analyze technology for the private sector, and engage in collaborative research with Vermont universities and utilities.”