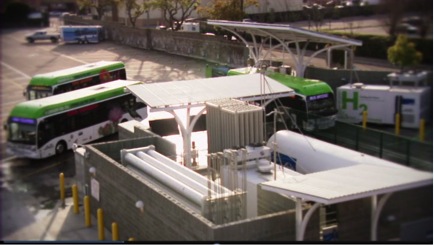 Hydrogen experts at Sandia/California were tapped for their technical expertise through a first-ever contract with the state of California to investigate a May 4 (2012) hydrogen release at the Bay Area’s Alameda-Contra Costa Transit District (AC Transit) hydrogen fueling station in Emeryville, CA.
In their investigation, Sandia researchers concluded that an internal component of a pressure-relief valve used in the facility’s fueling station failed, and that the material of construction of the valve component was a poor choice for hydrogen service. Sandia’s materials scientists, publishers of the “Technical Reference for Hydrogen Compatibility of Materials,” recommended that AC Transit replace pressure relief valves with devices specifically designed for hydrogen service.

As part of the Open Government initiative launched by the Obama administration, Sandia National Laboratories’ Technical Reference on Hydrogen Compatibility of Materials has made its debut on the Energy Dataset of OpenEnergyInfo, or OpenEI. Many in the industry working to increase the competitiveness of clean hydrogen-powered fuel cell electric vehicles (FCEVs) already consult the reference guide, which has been available on Sandia’s web page for several years. But, now, the information found in the publication is more widely available and easier to access.