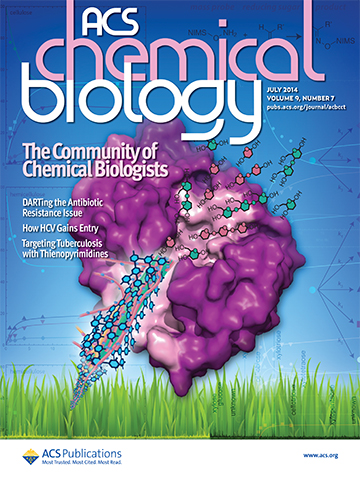 GHs are critical to cycling of plant biomass in the environment, digestion of complex polysaccharides by the human gut microbiome, and industrial activities such as deployment of cellulosic biofuels. In their article, the team shows how cell-free expression, bioconjugate chemistry, and surface-based mass spectrometry can be used to study GH reactions with plant biomass. New reaction specificities are identified, and differences in rates and yields of individual enzymes are demonstrated in reactions with biomass substrates. Numerical analyses of time-series data suggests that synergistic combinations of mono– and multi-functional GHs can decrease the complexity of enzymes needed for the hydrolysis of plant biomass during the production of biofuels.

Summary of the oxime-NIMS approach. The amino-oxy group on the NIMS probe reacts with the aldehyde group in reducing sugars released from biomass by enzymatic hydrolysis. The resulting covalent adduct is then applied to a surface for subsequent mass spectral analysis.