Jerry Simmons Is One of Three Researchers Named as Laboratory Fellows

Jerry Simmons Is One of Three Researchers Named as Laboratory Fellows 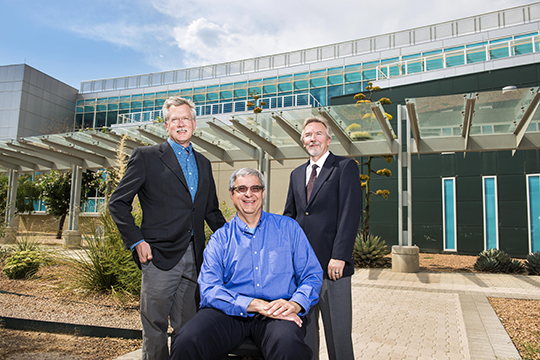 This status is reserved for those who are nationally or internationally recognized pioneers in their fields. It is considered a promotion to the highest level of R&D staff, equivalent to the level of management immediately below Sandia’s vice presidents. “The three new fellows have histories of sustained and equally distinguished accomplishments in their fields,” said Sandia President and Labs director Paul Hommert in announcing the appointments.

Simmons (Semiconductor and Optical Sciences Center) made notable discoveries in the physics that examines electron tunneling—how an electron can turn up where by rights it shouldn’t be. He is well known for linking fundamental scientific understanding with engineering impact and has demonstrated leadership in helping to advance solid-state lighting, terahertz sources and detectors, and quantum qubits. “I am honored to be recognized and thank colleagues I’ve worked with over the years. Almost everything I’ve done has been a team effort with very talented people,” said Simmons. “As a fellow, I hope to spend more time working with others to explore new ideas, and then build new teams to bring those ideas closer to reality.”