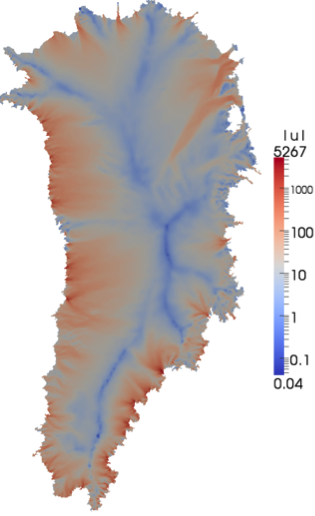 Ice-flow velocity magnitude [m/yr] on the surface of the Greenland Ice Sheet, as computed by the Albany/FELIX finite-element code.

Sandia’s Albany/FELIX dynamical core for ice sheet simulations continues to mature rapidly. This code is being developed as both a stand-alone model for scientific investigations and as the land ice component of coupled climate simulations in DOE’s Earth System Model. The land ice component is responsible for simulating the evolution of the Greenland and Antarctic Ice Sheets, with particular attention to their contributions to global sea-level rise.

Our recent highlight is the successful completion of a controlled mesh convergence study for the computation of the velocity field of the Greenland Ice Sheet, with discretizations up to 1.1 billion unknowns. This study demonstrated

A crucial result of the convergence study is the quantification of discretization error, informing scientists, for instance, on how many vertical levels are needed in the finite-element mesh to still retain accurate solutions (spoiler alert: ~40).

In only the second year of a five-year project, jointly funded by the Advanced Scientific Computing Research and Biological and Environmental Research offices in the DOE Office of Science under the SciDAC program,  rapid Albany/FELIX development can be attributed to the component-based code design approach. This is a strategic effort to grow and mature our foundation of computational-science capabilities as interoperable software libraries, to maximize the leveraging between projects. Albany/FELIX benefits from dozens of capabilities that were previously developed by other projects (e.g., linear solvers, mesh database, and automatic differentiation software in Trilinos), and in turn has improved the common code base (e.g., multiple-level solvers for thin domains, finite element kernels for new architecture) for other applications.