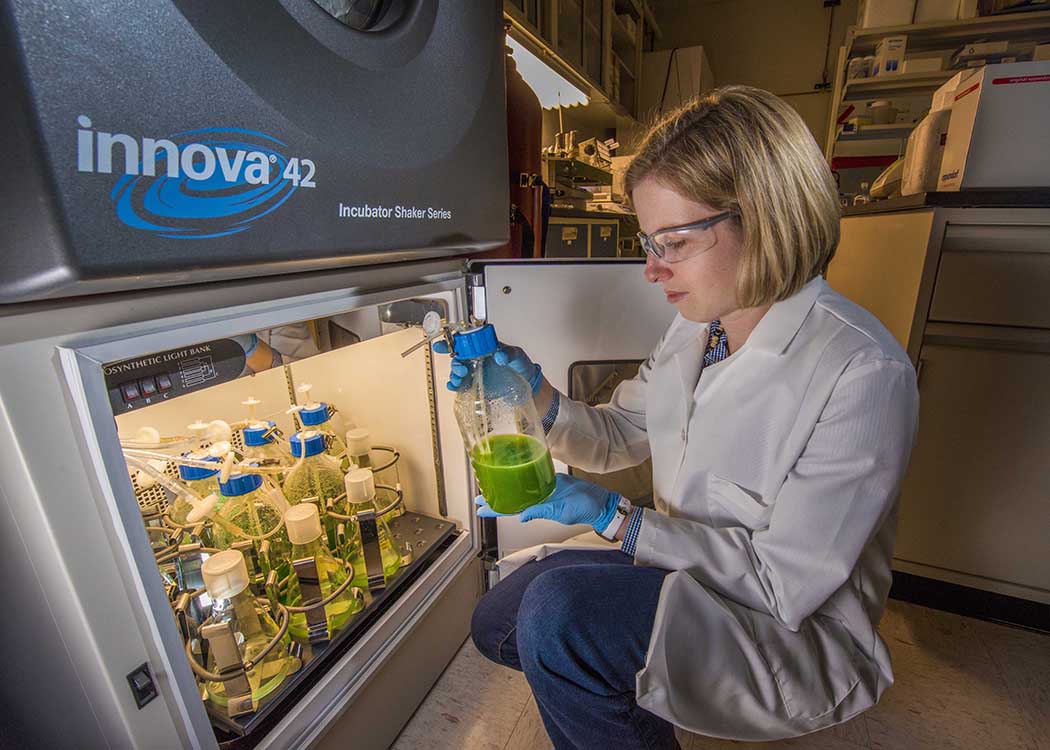 Truman Fellow Anne Ruffing looks at a flask of cyanobacteria with precipitated fatty acid floating on top. She has engineered two strains of cyanobacteria to produce free fatty acids, a precursor to fuels, as she studies the direct conversion of carbon dioxide into biofuels by photosynthetic organisms.

Sandia Truman Fellow Anne Ruffing (8622) has engineered two strains of cyanobacteria to produce free fatty acids (FFAs), a precursor to liquid fuels, but she also found that the process cuts the bacteria’s production potential. She published her work on one strain, “Physiological effects of free fatty acid production in genetically engineered Synechococcus elongatus PCC 7942,” as the cover article in the September 2012 issue of Biotechnology and Bioengineering.

Genetically engineered cyanobacteria excrete FFA, allowing fuel collection without harvesting the cyanobacteria—lowering nitrogen and phosphate requirements and reducing costs. While other research efforts have focused on metabolic engineering strategies to boost production, Ruffing sought to identify what physiological effects limit cell growth and FFA synthesis. “You can’t really hope to continue to engineer it to produce more of the fatty acids until you address these unforeseen effects,” she said. “As much as you want to investigate the applied side of things, creating the strain, you can’t get away from the fundamental biology that’s necessary in order to do that.”

The strains she engineered for FFA production show reduced photosynthetic yields, degradation of chlorophyll-a, and changes in light-harvesting pigments. She saw some cell death and lower growth rates overall and suspects the toxicity of unsaturated FFA and changes in membrane composition are responsible. Now she’s looking at what genes change when cyanobacteria produce fatty acids.

Read the abstract in Biotechnology and Bioengineering.