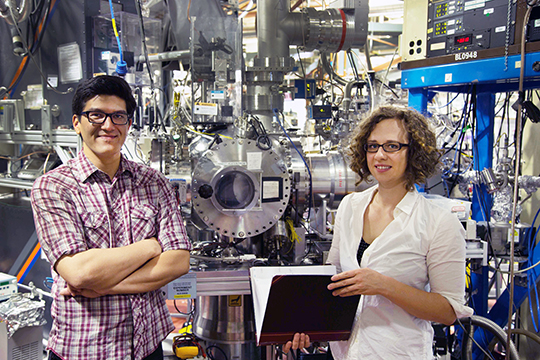 Sandia researchers are the first to directly measure hydroperoxyalkyl radicals—a class of reactive molecules denoted as “QOOH”—that are key in the chain of reactions that controls the early stages of combustion. This breakthrough has generated data on QOOH reaction rates and outcomes that will improve the fidelity of models used by engine manufacturers to create cleaner and more efficient cars and trucks.

A paper, “Direct observation and kinetics of a hydroperoxyalkyl radical (QOOH),” describing the work, performed by David Osborn, Ewa Papajak, John Savee, Craig Taatjes and Judit Zádor (all in 8353) at Sandia’s Combustion Research Facility, is featured in the Feb. 6 edition of Science. 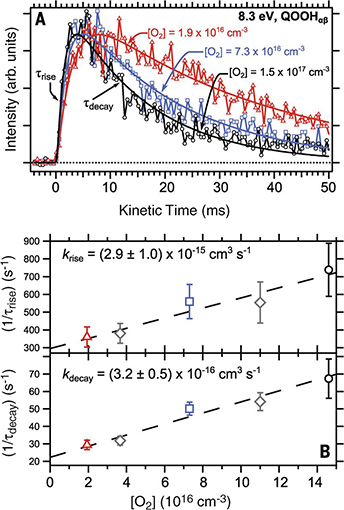 (A) Time dependence of m/z = 125.06 signal obtained at 8.3 eV (i.e., probing only QOOHαβ) at several [O2] (open symbols) and the corresponding double exponential fits (solid lines). (B) Second-order plots showing the linearity of 1/τrise and 1/τdecay versus [O2] and accompanying linear fits [symbols and colors correspond to (A)]. Their slopes determine krise and kdecay, respectively, which we assign as rate coefficients for QOOHαβ + O2 → products and Rβ + O2 → QOOHαβ reactions, respectively.

Thousands of chemical reactions are involved in the conversion of a fuel’s chemical energy into mechanical work in an automobile engine. The fleeting molecules that initiate, sustain, and then increase combustion are radicals: short-lived molecules that readily react and form new chemical bonds. Although many aspects of combustion are well established, a veil still covers ignition, the early stage of this process, and the chemistry that determines whether a fuel-air mixture will ignite rapidly, react slowly, or extinguish.

“We needed a specialized strategy to create enough QOOH radicals to detect, and we needed to determine the spectral fingerprint of a QOOH molecule, so that we would recognize it if we created it.” Chemist John Savee came up with that strategy. Putting his knowledge of combustion chemistry to work, Savee helped pinpoint the best fuel for producing a detectable QOOH. He chose cycloheptadiene, a molecule with seven carbon atoms arranged in a ring.

Initial experiments seemed to prove Savee’s ideas were right, and the team turned to its computational experts, Papajak and Zádor, who used quantum chemistry to predict what the experimentalists should have observed. Agreement between the two approaches would aid in confirming the discovery.

For the direct measurements, the team moved the Sandia-designed Multiplexed Photoionization Mass Spectrometer (MPIMS) to the Advanced Light Source, a LBNL synchrotron user facility. The intense tunable light created by the synchrotron allowed the team to measure spectral fingerprints of molecules, deducing the particular arrangement of atoms that gives a molecule its identity.

They confirmed that the spectrum of the radical they observed matched that predicted by Papajak and Zádor, showing that it was in fact a QOOH molecule, rather than some other possible arrangement of the same atoms.

This research was funded by the Office of Basic Energy Sciences within the U.S. Department of Energy’s Office of Science.