In a recent Nature Com­munications paper, Sandia researcher Hongyou Fan (at Sandia’s Advanced Materials Laboratory) and colleagues have achieved a start toward using mechanical force to process nanoparticles more subtly than the most advanced chemistry. Their newly patented method uses simple pressure—a kind of high-tech embossing—to produce finer and cleaner results in forming silver nanostructures than do chemical methods, which are not only inflexible in their results but leave harmful byproducts that must be disposed. 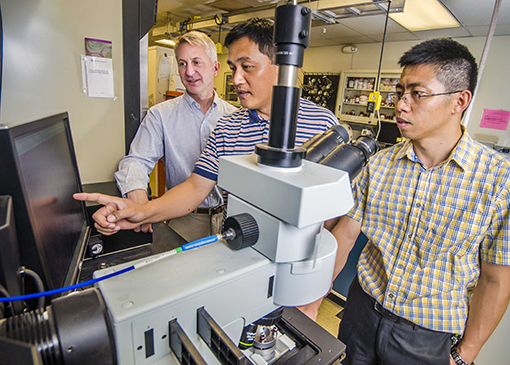 “In our technology, two diamond anvils were used to sandwich nanoparticulate thin films. This external stress manually induces transitions in the film that synthesized new materials,” Fan said. The pressure, delivered by two diamond plates tightened by four screws to any controlled setting, shepherds silver nanospheres into any desired volume—creating conditions that produce nanorods, nanowires and nanosheets at chosen thicknesses and lengths rather than the one-size-fits-all output of a chemical process.

Said Sandia co-author Paul Clem (manager of Sandia’s Electronic, Optical, & Nano Materials Dept.), “This is a foundational method that should enable a variety of devices, including flexible electronics such as antennas, chemical sensors, and strain detectors.” It also would produce transparent electrodes for solar cells and organic light-emitting diodes, Clem said.

Depending on the size, composition, and phase orientation of the initial nanoparticle arrays, a variety of nanostructures or nanocomposites and 3D interconnected networks are achievable. No thermal processing or further purification is needed.

While experiments reported in the paper were performed with silver—the most desirable metal because it is the most conductive, stable, and optically interesting and becomes transparent at certain pressures—the method also has been shown to work with gold, platinum, and other metallic nanoparticles.

Clem said the researchers are now starting to work with semiconductors.

This work was funded by the DOE Office of Science.