Researchers at Sandia’s Combustion Research Facility, the University of Manchester, Bristol University, University of Southampton, and Hong Kong Polytechnic have successfully measured reaction rates of a second Criegee intermediate, CH3CHOO, and proven that the reactivity of the atmospheric chemical depends strongly on which way the molecule is twisted. The measurements will provide further insight into hydrocarbon combustion and atmospheric chemistry. A paper describing the research findings, “Direct Measurements of Conformer-Dependent Reactivity of the Criegee Intermediate CH3CHOO,” is featured in the April 12 edition of Science magazine. 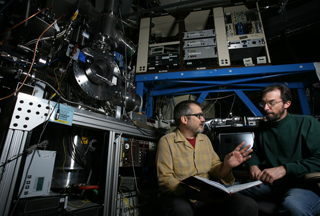 Sandia combustion researchers Craig Taatjes and David Osborn discuss data found from the detection and measurement of Criegee intermediate reactions. The apparatus seen on the left was used to make the measurements, which researchers believe will substantially impact existing atmospheric chemistry. (Photo by Dino Vournas)

Hydrocarbons that are emitted into Earth’s troposphere, either naturally or by humans, are removed by many reactive atmospheric species. For unsaturated hydrocarbons—molecules with at least one C=C double bond—a prominent removal mechanism is reaction with ozone, called ozonolysis. It is accepted that ozonolysis produces other reactive species, including carbonyl oxides, which are known as Criegee intermediates. Rudolf Criegee, a German chemist, first proposed the mechanism of ozonolysis in the 1950s.

Because so much ozonolysis happens in the atmosphere, the reactions of Criegee intermediates are thought to be very important in a wide range of tropospheric processes like secondary organic aerosol formation and nighttime production of highly reactive OH radicals. As a result, the chemistry of these reactive Criegee intermediates has been the subject of intense investigation for decades, but without any direct measurement of their reaction rates until last year’s published work by Sandia and its collaborators.  That earlier research was featured in the January 13, 2012, edition of Science. A short video featuring two Sandia researchers describing the work can be seen here.

Sandia combustion chemist Craig Taatjes (in the Combustion Chemistry Dept.), the lead author on the Science papers, said there are several significant aspects about the new research findings. In particular, the measurements show that the reaction rate depends dramatically on whether the CH3CHOO is bent, with the CH3– and –OO ends pointing toward the same side, a conformation called “syn–” or more straightened, with the CH3– and –OO ends pointing away from each other, called “anti–”. “Observing conformer-dependent reactivity represents the first direct experimental test of theoretical predictions,” said Taatjes. “The work will be of tremendous importance in validating the theoretical methods that are needed to accurately predict the kinetics for reactions of Criegee intermediates that still cannot be measured directly.”

The research was funded by the U.S. Department of Energy’s Office of Science and conducted using the Advanced Light Source, a scientific user facility also supported by the DOE Office of Science. DOE’s Office of Science is the single largest supporter of basic research in the physical sciences in the U.S. and is working to address some of the most pressing challenges of our time. For more information, please visit science.energy.gov.

Read the paper at Science magazine.