The DTOcean team is developing a fast-running, easy to use current-energy capture (CEC) array spacing tool that considers tidal array performance vs efficiency. In support of this effort, Sandia has been assisting in developing the device wake modeling submodule that determines a tidal turbine’s wake properties (i.e., wake growth and dissipation). Initial efforts were focused on implementing simple analytic models, which have been historically used for wind-turbine wakes. While these methods are very simple and quick to run, they lack the fidelity required to adequately describe the complex features of physical turbine wakes. The Sandia team explored computational fluid dynamics (CFD) models—due to their ability to accurately capture wake structure in detail. While the CFD models yield much more accurate results than simplified analytic models, the cases are not always easy to set up and can be very time consuming to perform.

To merge the benefits of each method, the Sandia team developed a hybrid-type model, which consists of a CFD simulation database from which interpolated solutions can be obtained instantly.  The team then populated a CFD simulation test matrix, using nondimensionalized inflow and turbine diameter conditions spanning a wide range of thrust coefficients and inflow turbulent intensities, and developed an algorithm to interpolate intermediate points. The result is a fast-running tool with the capability to produce high-level, detailed wake flow results as a function of

Additional parameters that effect tidal turbine wakes, such as yaw angle to incident flow and vertical blockage ratio, may be incorporated as part of future revisions of the CFD populated wake database.

A series of axisymmetric CFD solutions for ten different thrust coefficients and ten different turbulent intensities were simulated to populate this database. The ten thrust coefficient (CT) values were distributed evenly between 0.1 and 1.0, and the ten turbulent intensity (TI) values were distributed between 0 and 0.3 with discretization in the range of 0.025 to 0.05, yielding the following parameter space.

Note that the simulations run for the database are run axi-symmetrically without confining walls and produce very fundamental CEC flow results. 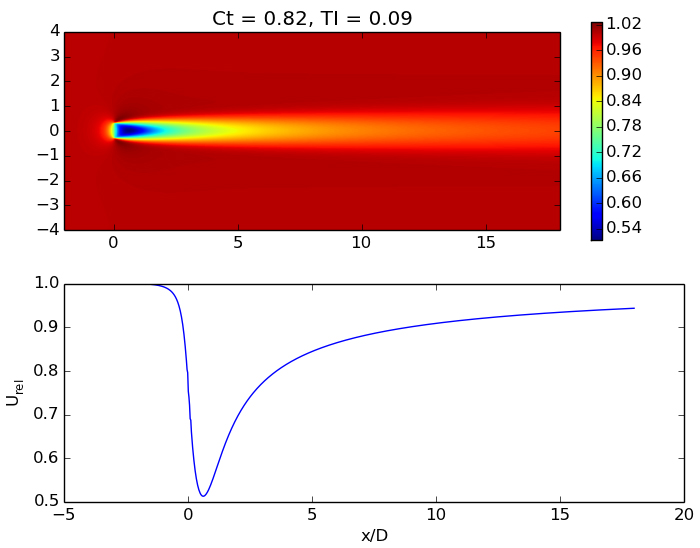 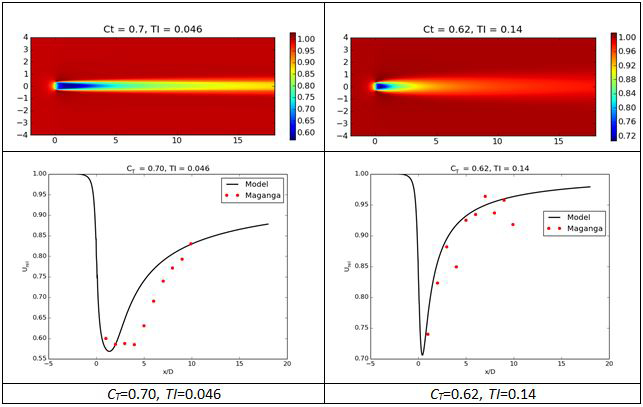 Figure 2. Parametric CFD model results. At the top is the interpolated wake velocity contour plot, and at the bottom is the centerline wake velocity compared to the Maganga data.

The first figure shows an interpolated solution for CT = 0.82 and TI = 0.09. The results are a Barycentric weighted average using the entries in the table, which come from the database. The second figure shows the parametric CFD model tested against the experimental data of Maganga, et al. [1]. The solution is obtained instantly from the database lookup, and appears to match the data fairly well. Again, this is no longer a direct CFD calculation of the Maganga experiment; it is simply an interpolated solution of nearby solutions from the CFD database.