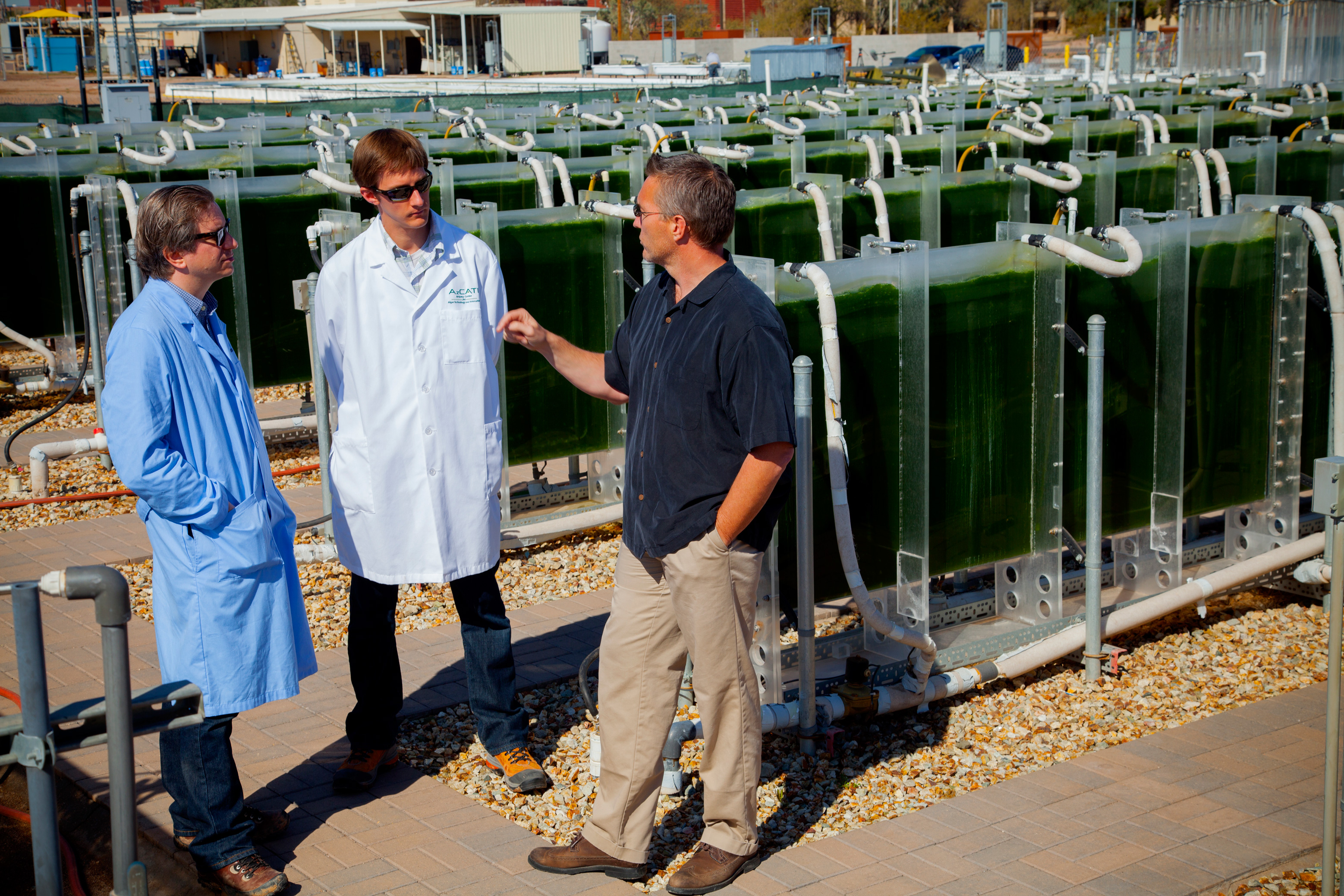 Sandia National Laboratories’ Tom Reichardt, left, and Aaron Collins, center, chat with John McGowen of the Arizona Center for Algae Technology and Innovation (AzCATI). Sandia has developed several complementary technologies to help the algae industry in detecting and recovering from pond crashes, and is making use of the AzCATI test-bed facility to collect data and apply its technologies. (Photo by Steffan Schulz)

Sandia’s Tom Reichardt (Remote Sensing and Energetic Materials Dept.), a researcher who works in the Sandia’s remote sensing unit, led development of an online algal reflectance monitor through an internally funded project. The instrument continuously analyzes the algae’s concentration levels, examines its photosynthesis, and performs other diagnostics. This real-time monitoring can warn pond operators when the ponds have been attacked, but it may not be able to identify the attacker.

To help pinpoint problems, a Sandia team led by researcher Todd Lane (Systems Biology Dept.) recently developed a process to quickly and accurately identify pond crash agents through ultra-high-throughput sequencing using RapTOR. “It’s important for the growth of an algal industry to develop a method where algal pond operators can learn immediately when there’s a problem with their ponds from a biological agent standpoint,” said Lane. A Sandia team led by researcher Jeri Timlin (Bioenergy and Defense Technologies Dept.), in collaboration with the University of Nebraska’s Van Etten Lab, enhanced the RapTOR diagnostics by studying certain viral interactions with algal cells. They identified signatures that could provide early detection and subsequent mitigation of algal pond viral infections. 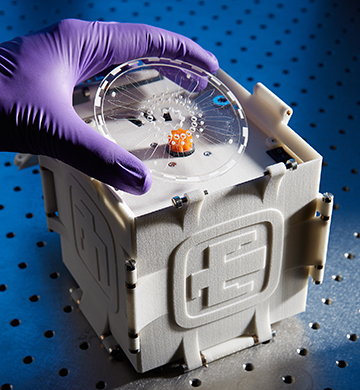 A device like Sandia’s SpinDx could run early detection tests for algal pond operators whenever they sensed instability in their ponds. Issues could then be investigated more thoroughly, with SpinDX helping to determine the root biological cause of the problem. (Photo by Jeff McMillan)

The Sandia process involves a central facility where pond operators would send algal pond samples. Lane’s team applied SpinDx, a device developed by other Sandia/California researchers that can (among other features) analyze important protein markers and process up to 64 assays from a single sample, all in a matter of minutes. Pond operators could regularly use a SpinDx-like device to run early detection tests. They could then provide samples to an off-site facility, which in turn would send back assays to allow the operator to investigate a problem more thoroughly and ward off pond crashes before they occur. “That’s the beauty of SpinDx,” said Lane. “The disks are inexpensive, require little technical expertise, and can be manipulated by nonscientists.”

Now that the core principles of pathogen detection and characterization technologies for pond crash forensics have been successfully proven, the next step will be to conduct more robust demonstrations. Lane’s and Reichardt’s groups are continuing their work as part of the Algae Testbed Public-Private Partnership (ATP3) led by Arizona State University (ASU), the first national algae testbed. The Sandia team will apply the technologies, collect more data, and seek additional collaborations. “Our results over these past couple of years have been compelling, but now we need to deploy the technology into real-world ponds,” Lane explains.